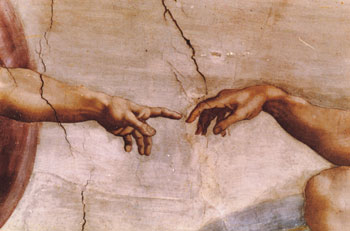 The Sistine Chapel is a truly awe-inspiring sight: a testimony to human ingenuity, effort, and creativity. No less awe-inspiring — and far less easily understood — are the mental processes that allow humans to see the chapel’s famous vaulted ceilings and the paintings that adorn them. We know more or less how the Sistine Chapel was built and decorated, but scientists are still figuring out what goes on in our brains when we see it. In an article published in the Journal of Cognitive Psychology, William L. Thompson adds to our understanding of visual perception by contrasting visual attention with visual mental imagery.

The attention task required participants to focus their attention on either a large (16.5 x 16.5 cm) or small (1.8 x 1.8 cm) square and then determine whether or not a black dot appeared within the box during a 4 s interval. The black dot, which appeared for 20 ms in half of the trials, measured 1 x 1 mm.

Like the attention task, the mental imagery task required participants to focus their attention on the large or small squares. Before determining whether a 1 x 1 mm dot appeared within the squares, however, the participants in the imagery condition were asked to visualize an assigned object (such as an elephant or the Apple logo) inside of the squares. Then, while continuing to visualize the assigned object, they completed the dot task. Next, participants were asked to indicate whether or not the object they were visualizing had a specific characteristic (e.g., “hanging ears” or “bitten left side”). The same participants completed both the mental attention and mental imagery tasks.

The participants were better at the attention task when they were dealing with the smaller square; they were better at the imagery task when they were dealing with the larger square. The fact that the size manipulation led to different results in the attention task and imagery task led Thompson and his coauthors to conclude that visual mental imagery is more than a special type of visual attention; attention and imagery are distinct cognitive processes. For scientists who study vision, it’s another small step toward understanding the human brain as well as we understand the Sistine Chapel.

Did you deliberately flip the image? You have it the wrong way round, God is on the right. Interestingly if you look at the full image you will see God sitting in what looks very much like a cross section of a human brain.

((I had first noticed the different expressions of the hands & wondered about the one on the right and on the left.)) Yes the image was flipped. Excellent observations.