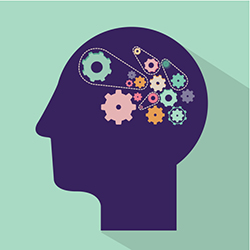 Although personality researchers have made great strides in discovering and describing patterns of trait covariation, very little attention has been paid to why traits — which are often psychometrically or neuroanatomically distinct — covary in the first place.

In an article published in 2013 in the European Journal of Personality, author Aaron W. Lukaszewski (Loyola Marymount University) suggests that an adaptionist common calibration theory may help explain trait covariation. According to this model, personality traits are calibrated based on cues from the environment that signal the current cost or benefit of displaying each trait. When several traits are calibrated based on the same cue, they tend to covary together within an individual.

In the current study, Lukaszewski examined the covariation of a specific cluster of interpersonal traits that included extraversion, approach motivation, emotionality, fear of rejection, avoidance motivation, interpersonal trust, and attachment styles. He hypothesized that each trait covaried because each was calibrated to the common cue of relative bargaining power (RBP) — an individual’s ability to confer benefit on or inflict costs on others. An individual’s RBP strongly influences the social evaluations and responses of others, and because of this it should be an important cue used to calibrate a variety of interpersonal traits.

In line with his proposed model, Lukaszewski found that self-perceptions of physical strength and attractiveness highly correlated with measures of actual physical strength and beauty, indicating that self-perceived RBP is based on accurate assessments of one’s abilities. Self-perceptions of RBP were then found to have independent associations with each trait in the personality syndrome. Essentially, each trait was found to be independently calibrated to self-perceived RBP.

The fact that this model was able to explain a majority of the covariation between these individual traits is exciting, as it provides support for a new way of understanding and conceptualizing the covariation seen between personality traits. Although promising, however, this model is in need of more refinement, and future research should seek to test additional models explaining trait covariation that include common calibrators.

Reference
Lukaszewski, A. W. Testing an adaptationist theory of trait covariation: Relative bargaining power as a common calibrator of an interpersonal syndrome. European Journal of Personality, 4, 328–345. doi: 10.1002/per.1908