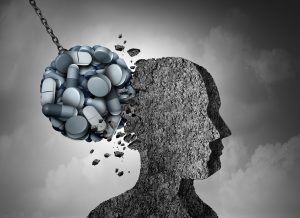 In recent years, heroin and other opioid fatalities have escalated to crisis proportions, intensifying the need for evidence-based recommendations for educational and policy campaigns to prevent abuse of opioids and other substances. Understanding the neurobiological mechanisms underlying drug-seeking behaviors is vital to creating these prevention campaigns. To fully provide a neurobehavioral view of addiction, it is important to answer two major questions: (a) why do people seek drugs in the first place? and (b) why do some people who use drugs eventually become unable to resist drug temptation and become “addicted”?

In this issue of Psychological Science in the Public Interest (Volume 20, Issue 2), Antoine Bechara, Kent C. Berridge, Warren K. Bickel, Jose A. Morón, Sidney B. Williams, and Jeffrey S. Stein review several addiction theories, focusing on the case of opioids. They pay special attention to the intersection between pain and opioid-use disorders and to the role of the perceived low risk of taking legal medicinal opioids (e.g., hydrocodone), often prescribed by health professionals, in the decision to use opioids. Bechara and colleagues also review the roles of the prefrontal cortex and the insula on the decision to use drugs and possible individual differences in predisposition or vulnerability to drug addiction (i.e., why some people who use drugs become addicted, while others do not). They also describe several novel therapeutic strategies and policy ideas that could help to prevent opioid and other substance abuse.

In the specific case of opioid use, it is important to account for their analgesic properties and the intense feelings of euphoria they produce. Opioid drugs like heroin, morphine, fentanyl, and oxycodone have analgesic properties linked to the pain pathways in the brain, but they also have addictive properties linked to their effects on the dopamine system (i.e., they change the so-called wanting system, a neural structure responsible for the salience of incentives to pursue certain rewards, and these changes increase drug cravings). Although there is evidence for opioids’ usefulness in the treatment of acute pain (e.g., immediately after surgery), they do not seem effective in the treatment of chronic pain. Rather than helping with chronic pain, long-term opioid use can induce tolerance and hyperalgesia (increased sensitivity to pain). Moreover, patients who have been on opioids for more than 90 days seem to be at risk of continuing to take opioids and developing a substance-use disorder. Given that the development of chronic pain and opioid-use disorders over time may alter the neurobiological response to opioids, the authors call for more research in people experiencing chronic pain.

Bechara and colleagues also describe how addiction could result from abnormal functioning in three brain systems: the amygdala-striatum (the “impulsive” system), the prefrontal cortex (the “executive” system), and the insula (an area involved in increasing urges and cravings). They discuss individual differences and their implications for prognosis, as well as the importance of future research on how specific abnormal brain functioning may be related to different patterns in recovery from addiction and subsequent abstinence. Exploring individual differences in these mechanisms might explain why some people do not develop addiction or become functional addicts (i.e., individuals who take drugs but have suffered minimal social and psychological harm as a result of their drug use, usually because they stop procuring or using drugs when it is no longer worth the cost).

Commentary on Bechara et al.’s “A Neurobehavioral Approach to Addiction: Implications for the Opioid Epidemic and the Psychology of Addiction”

In an accompanying commentary, T. W. Robbins, a professor of cognitive neuroscience at the University of Cambridge, agrees that neurobehavioral research is needed to investigate the underlying mechanisms of drug abuse and that it is particularly timely in the context of the U.S. opioid epidemic. However, whereas Bechara and colleagues reviewed the  opponent-motivational-processing perspective (i.e., a drug activates reward processes and creates euphoria, which counteractivates an unpleasant process that will eventually persist over the pleasant process and create withdrawal syndromes) and dismissed it as a complete explanation of addiction because it cannot handle the vulnerability to relapse after withdrawal, Robbins suggests that this might be a valid theory of addiction. He argues that broadening the theory to include voluntary behavior (e.g., an individual with addiction will seek heroin in anticipation of withdrawal to prevent its negative effects of withdrawal, which as an example of a hard to extinguish avoidance behavior) would strengthen its explanatory power. Robbins also points out the role of Pavlovian conditioning in addiction and how environmental stimuli (e.g., locations, people, or paraphernalia associated with drug use), as well as the action of the drug itself, can stimulate drug-seeking behavior. He suggests further clarification of some aspects of the research, such as the role of motivation in habits or the different predisposing factors for different drugs (e.g., impulsive behavior seems to predict future cocaine-seeking but not future heroin-seeking). In addition, Robbins suggests that, besides the interventions suggested by Bechara et al., a neurosurgical procedure called deep-brain stimulation may be a viable intervention.

This is an interesting and informative review of current neuroscience applied theories. Alas, this review also makes it clear that while we have more potential treatments, we have no cure. As recovery research by Dennis, Foss,& Scott (2008) points out, even after 5 years of abstinence, the odds of relapse never go to zero. The Koob & LeMoal model of addiction still seems to be the most parsimonious and most useful explanation of addiction and recovery.

Surely the cure hides in our genes and in our brains. The search continues.