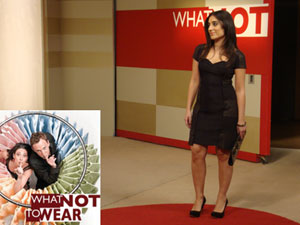 Azadeh Aalai, Montgomery College, modeling what to wear after her fashion makeover on the show What Not to Wear

As a social psychologist, I have always thought of myself as someone who was acutely aware of the power of the social situation to shape individual behavior. And yes, I admit that I have oftentimes (privately) felt as if I had an advantage over those outside of our field in being aware of often overlooked social cues that are as important as personality when deliberating on impressions and accounting for human behavior — cues such as nonverbal communication, the power of images in the media to shape our thoughts, etc. Yes, I liked to think that I was an observant student of life and that my awareness of all of the many social psychological cues in social situations would serve me well in my own social encounters. So imagine my surprise when I found myself under a spotlight and a camera, ambushed by a pair of renowned fashionistas, one of them remarking to me with a smirk, “You know, for someone who thinks a lot, you sure haven’t put any thought into what you wear.”

Perhaps I should back up. It was on a brisk November evening that I found myself entering the Historical Society in Washington, DC, with a folder tucked smartly under my elbow, prepared to give a talk about portrayals of women in the media. I was anticipating giving a talk about the ever-growing pervasiveness of celebrity focus in the media, and on female celebrities in particular, such as Britney Spears and how her every rise and fall has been documented for mass consumption. I had thought about many examples I would discuss and the potential questions the audience may ask. Indeed, for my role as the sole presenter that evening, I had thought about many things, with the exception, perhaps, of what I would be wearing when I walked in.

Those who watched my show air know that talk never actually transpired, for as I began my introduction behind the podium, I was ambushed by the pair of hosts, Stacy London and Clinton Kelly, from the popular TLC show What Not to Wear. It turns out that my sister had nominated me to be a guest on the show, and the lecture that I had been preparing to give was just a clever ruse to get me to a public area so that I could be filmed or, as I overheard the producers refer to it, “ambushed”. And so began my four day whirlwind introduction into the world of media, fashion, and my newly cultivated focus on the psychology behind what we wear.

Stacy London skewered me on that first evening for being a social psychologist so adept at acknowledging so many influencing factors on human interactions while neglecting to acknowledge that the clothing we wear can serve as a powerful impression formation tool. Indeed, the research tells us that individuals make their first impressions of a person they encounter incredibly quickly — within 39 milliseconds — and the clothing we are wearing undoubtedly interacts with many other visual cues to shape our first impressions. Thus began my journey into integrating clothing choices into my own arsenal as an impression management tool.

I must admit, though, that I was resistant to many of the declarations regarding the power of clothing that Stacy and her co-host, Clinton Kelly, lodged my way, foremost among them being the great significance they appeared to place on clothing in shaping both perceptions and our sense of self. As I am sure any woman can attest, growing up female in our culture is rife with conflict; we receive many mixed messages as we acquire our sense of femininity, chief among them the double bind of the female body being both objectified and revered through images and messages conveyed through the mass media. Over the course of the filming of the show (which I agreed to, albeit skeptically), I came to see that in refusing to acknowledge the importance of clothing selection in deriving my own sense of self, I was deliberately resisting the narrow and often incomplete model of womanhood perpetuated through our media. In resisting appearing fashionable, I thought that I could rebel against the societal constraints that are oftentimes put on females. However, as Stacy and Clinton adeptly made me aware of over the course of filming, choosing not to think about what I was wearing was also making a statement, and not just about fashion. For even if I chose not to participate in cultivating a deliberate sense of style for myself to express externally through the clothes I wear, nonetheless others were still forming impressions of me based on my physical appearance.

Thus the greatest lesson I took from my experience on the show was that while I do not want to be defined by what I wear, I at least must become more mindful of how others’ perceptions of me may nonetheless be shaped by the clothes I select. Alas, as a social psychologist, I now add “clothing” to that ever growing list of social cues. This doesn’t mean that I will necessarily spend countless hours shopping or contemplating fashion per se, it just means that I am much more cognizant of the outside factors that may shape our impressions of others and the world around us.

A final lesson my participation on the show imparted — it turned out that I could use a little more sparkle in my life, even if it’s the transient kind that comes from wearing a shimmery gold shirt. 

This is wonderful Dr. Aalai! It’s great that you had this experience and realized that being selective on what you wear is not the most important thing in life, but it is a way of expressing who you are and a way of sending a message to society! I am Katie Piura. I was your student on Fall ’09. I always liked your style tho :). It was very classy! Best of luck in everything you do :D! Well-written btw :)!

P.S. And most importantly that you felt beautiful and comfortable with what you selected 🙂

I’m currently watching this episode now, and it’s rather refreshing to see a woman like you on their show( it’s definitely a first). I have very similar beliefs on how demoralizing and sexist our media is on the human condition, for both women and men( albeit excessively for women as we all know). I feel I would have had a very correlative dialogue to yours if I was in your shoes. I’m currently an educator as well, but, at the elementary level, and your story has inspired me even more to get my masters in a similar field. Thanks for being yourself and not conforming! I wish there were more like minded women and men out there.

I just watched your episode and found it inspiring! I am currently a psychology graduate student and, aside from feeling like my life is in purgatory, am sometimes confused about what to wear to class, internship, and eventually as a practitioner: too formal can send the wrong message to clients that is as bad or worse than too casual. Seeing my peers in everything from business suits to pajamas, coupled with an extremely limited budget is giving me a bit of identity crisis, fashion and otherwise! I admire that you really examined your ideas about fashion and stayed true to your comfort level and identity in the end. I think you showed that what we choose to wear when given endless options is just as important as why we choose to wear it. Thank you!

I love that show. I think how we present ourselves is also important to how we perceive ourselves. I feel much better as a woman when I look good and dress well. I just don’t feel as productive or attractive when I am in “slop” mode.

Azadeh Aalai is an assistant professor in the psychology department at Montgomery College in Germantown, MD. She recently earned her PhD in applied social psychology from Loyola University Chicago. The original episode entitled “Azi” first aired on February 15, 2011.