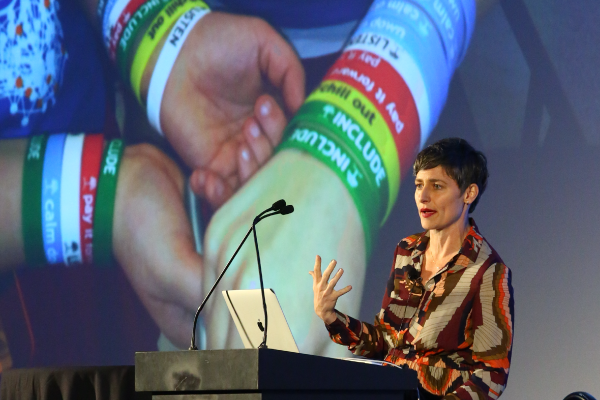 Betsy Levy Paluck on Norms and How to Change Them

In the days following the 2016 US presidential election, two misshapen swastikas and the words “Go Trump” were spray-painted on playground equipment in the affluent, liberal-leaning Brooklyn Heights neighborhood of New York City.

The shape of the swastikas, one of which was painted backward, prompted this reflection from author Maria Konnikova in a 2017 article for The New Yorker:

Apparently, the person engaging in hate speech didn’t know what a Nazi swastika looked like. This was someone trying on the role of anti-Semite for size — someone who hadn’t been a rabid neo-Nazi his whole life but who felt emboldened by the election of the new President. It was a new behavior prompted by a new event. Were such incidents, then, the new “normal”? And, if this shift of norms could happen with such speed, in such an improbable location, then how quickly and how much might the norms of our whole society change?

The Brooklyn Heights vandalism, says APS Fellow Betsy Levy Paluck, exemplifies the shifts in standards, attitudes, and behaviors that occur in communities and societies across the globe.

“We’ve been hearing a lot about norms in the world lately,” Paluck, a professor of psychology and public affairs at Princeton University, said in the Saturday Keynote Address at the 31st APS Annual Convention. “It’s what you’ve been seeing in the news, and not just in the United States. Populist, neofascist movements are forming all over the globe. And, most importantly, things are happening that we thought were against the law or that were relics of the past.”

But can those trends be redirected toward social harmony? Paluck’s research has demonstrated that norms can shift with theory-driven interventions.

In her dissertation work in postgenocide Rwanda, Paluck showed how a radio show featuring an interethnic couple led people to view such relationships as normal, which in turn appeared to influence their behavior without necessarily changing their personal beliefs. In longitudinal work involving 56 middle schools in New Jersey, Paluck and colleagues demonstrated how antiprejudice interventions targeted at certain individuals can spread through groups and reduce peer conflict and disciplinary problems.

Her research earned her the MacArthur Fellow Award, known as the “Genius Grant,” in 2017.

Psychological studies have repeatedly shown that our behavior is shaped by what our social groups believe to be normal.

“We’re particularly motivated not to stick out,” Paluck said. “We take these social signals as what’s likely true and what’s likely desirable.”

Paluck’s work, however, has increasingly focused on the power of institutional communications to change our perceptions of social norms, even if they don’t change our personal attitudes.

If You See Something, Say Something

Mass media is an example of these institutional forces, and Paluck recently collaborated with political scientist Graeme Blair (University of California, Los Angeles) and psychological researcher Rebecca Littman (MIT) to put the power of film to the test in Nigeria, where corruption is rampant at nearly all levels of society. Nigeria’s “Nollywood” movie industryis the third largest in the world behind Hollywood and Bollywood, and its films often respond to cultural and political events.

Paluck and her colleagues commissioned the production of a movie that included a subplot about characters who band together to report corruption in their communities. A “placebo” version of the movie excluded the subplot. Both versions advertised an actual hotline set up by an activist group to enable Nigerians to text reports of corruption.

The researchers randomly showed either the experimental or placebo version of the film across 106 different communities. Four months later, the hotline had received more than 1,181 responses and 241 concrete corruption reports that were predominantly from people in the “treatment” communities.

The scientists subsequently surveyed people across the communities and found that although the “treatment” film appeared to influence norms about the community’s corruption and anger about corruption, it didn’t change perceptions that reporting was becoming more widespread. Contrary to the prediction that viewers would overgeneralize the behaviors of characters in the film to others in their community, they did not think that reporting was on the rise — even when it was happening in their own communities. The viewers kept their own reports of corruption private and believed that the illicit activity remained largely unreported in their community.

In another test of institutional influences, Paluck turned to Princeton’s historic eating clubs — the private social institutions made famous in F. Scott Fitzgerald’s debut novel This Side of Paradise. The clubs host large parties on a weekly basis, and one particular club drew media attention in 2016 for its approach to combatting sexual violence. The Charter Club required all student partygoers to recite a written definition of consent that was handed to them at the door.

Paluck and colleagues Ana Gantman (Brooklyn College), Jordan Starck (Princeton University) and Ajua Duker (Yale University) worked with the club to use its entrance policy as the basis for an experiment. Some attendees were randomly assigned to read the original message, which contained legalistic content; others were required to recite a statement indicating that they stood with their fellow Princeton students against sexual violence, which was designed to convey an institution-wide norm.

When the students left later that night, an experimenter asked what they remembered and thought about the consent pledge they had read earlier. As the research team hypothesized, those who read the normative statement appreciated the pledge more and believed students were responsible for obtaining consent in sexual situations. Paluck and colleagues replicated the experiment at another eating club that had never used such a pledge as an entry requirement, and they found that reading the legalistic consent definition had a stronger influence on students than did the normative message.

Paluck is extending her research on the intersection of laws and social norms — a junction she examined in her study on the Supreme Court’s marriage equality decision. Currently, she is exploring how recently implemented state restrictions on abortions may be affecting perceived norms about women’s rights.

“Is this a similar institutional signal that’s coming from your state?” she asks. “Does it tell you about the way our country is going, or is it more localized?

Paluck believes our conception of norms, like our institutions and laws, shapes the way we think about the society in which we live.

“I think that norms matter,” she concluded. “I don’t know how much yet. I think we’ll be researching this for a long time. ”