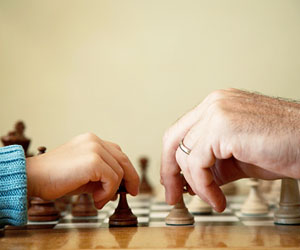 Like a barrel-aged whiskey or a ripening cheese, some things improve with maturity – including some cognitive abilities, new research shows. While many visual and cognitive abilities seem to peak in early adulthood and decline thereafter, findings from researchers at VA Boston Healthcare System and Harvard University indicate that a person’s ability to sustain attention seems to be get better over time, reaching its peak around age 43.

The study was led by researchers Francesca Fortenbaugh, Joe DeGutis, and Michael Esterman at the Boston Attention and Learning Laboratory at the VA Boston Healthcare System.

“While younger adults may excel in the speed and flexibility of information processing, adults approaching their mid-years may have the greatest capacity to remain focused,” DeGutis said in a statement from the VA Boston Healthcare System.

Sustained attention abilities are critical to fundamental cognitive processes, like learning and memory; lapses in sustained attention can have wide-ranging negative impacts, such as increasing the chances of auto accidents and reducing job performance.

Researchers examined data from 10,000 participants ages 10 to 70 who visited TestMyBrain.org from March through September 2014. TestMyBrain.org is a cognitive testing website that provides users with feedback on their performance relative to other users of the site.

To measure sustained attention abilities, the site included a task in which participants were presented with gray-scale photographs of a total of 10 city scenes and 10 mountain scenes. Each scene gradually transitioned to the next every 800 milliseconds, and participants saw a total of 299 images during the 4-minute task. As one image faded, it was gradually replaced by a new image, which increased in clarity at the same rate as the old image decreased in clarity. The participants were told to press the space bar whenever they saw a city scene, but to withhold a response if the image showed a mountain scene. Thus, they had to pay close attention to the emerging scene so that they could make their determination quickly and accurately.

The Boston Attention and Learning Laboratory studies the cognitive and neural mechanisms of sustained attention as well as the potential for enhancing attention abilities through cognitive training.

“What we know is that attention is highly trainable, and the practice of focusing attention throughout adulthood may further hone this skill,” said DeGutis. “Activities such as spending more time outdoors, exercise, cognitive training, and meditation are ways in which people at any age can enhance their ability to concentrate.”

According to the researchers, the results of this study may have practical applications in diverse occupational settings, particularly for training in specific jobs that require continuous attention during monotonous, repetitive tasks, such as truck driving and baggage screening. More importantly, this research is already proving helpful in the treatment of ADHD, PTSD, stroke, addiction, and aspects of depression that are directly linked to sustained attention and common among the Veteran population.

The research was funded through the Department of Veterans Affairs Clinical Science Research and Development, and Harvard University.

Indeed Maturity increases focus, ADD and other pathologies might completely disappear. Awareness of maturity pros can help both professional and personal life. However I guess we should also try to be as flexible as less mature fellows 😉 Thanks for araising the topic.

Interesting piece. When I was young, I had no patience for proofreading my own work, now, I read a sentence several times, changing it and reworking it until it suits me. I’d say my focus is the best it’s ever been, but I concede I am no multi-tasker (never was).