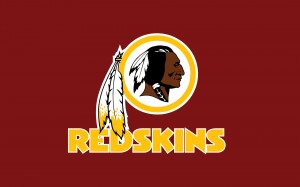 On prime time TV this week, during halftime of the NBA playoff game, the Yocha Dehe Wintun Nation of California ran a paid advertisement to protest cultural stereotyping of Native Americans. The 2-minute clip was a series of images, each associated with a spoken word: soldier, doctor, spiritualist, son, daughter, patriot, rancher, struggling, resilient, Sioux, Pueblo, Apache, Blackfoot, and more. The video ended with these words: “Native Americans call themselves many things. The one they don’t . . .” This sentence ended as the final image occupied the screen: the logo of the Washington Redskins.

My hometown football team has been under fire for many years for using the derogatory term “redskin” as its team mascot, but the heat has risen noticeably this year. As it should—the name is offensive on so many levels. It’s not only an inaccurate physical description of a diverse people. It’s also a cruel stereotype of Native American character. One doesn’t choose a football team mascot for traits like compassion and spirituality, but rather as an embodiment of aggression and ferocity and savagery.

Team owner Dan Snyder could and should do the right thing and get rid of the offensive team name, but he didn’t create the stereotype, nor did the previous owner, nor the one before that. Indeed, the stereotype existed long before the football team—even before football. But where and how do such mean-spirited and distorted caricatures get started?

Psychological scientists are very interested in the origin and purpose of stereotypes, and a team from Scotland has been testing some ideas about this particular kind of cultural evolution. The University of Aberdeen’s Douglas Martin and his colleagues knew from much previous research that stereotypes are highly functional on a cognitive level. They allow us to simplify and make order out of an otherwise impossibly complex body of random information known as the world. The scientists wondered if this mental function—and bias toward simplification—might also help explain the spontaneous emergence and transmission of simplistic caricatures over time.

Their reasoning was that information that is initially complex, incongruous or random—that is, accurate—becomes simplified, consistent and systematic as it is repeatedly filtered through the human mind’s cognitive biases.  Eventually, the information takes a form that is easily remembered and accurately transmitted—but almost always distorted and unfair.

They used an ingenious methodology, called the linear diffusion chain, to model the transmission and modification of caricatures over generations. The scientists created 27 novel “alien beings” with physical characteristics and personality attributes. The aliens were categorized by shape, color and movement, so that one might be a blue triangle moving horizontally, and another a green circle bouncing, and so forth. Each of these 27 was depicted by a simple drawing, and each had six randomly assigned personality attributes—confidence, arrogance, caring, and so forth.

The scientists then recruited volunteers to take the part of successive human generations in the process of evolution. It’s a fairly complex experiment, but to simplify, the first generation learned and attempted to remember the traits associated with each of several categories of alien. They were tested on these aliens, and their test responses were then used as training materials for the second generation, along with new random information about other aliens. This second generation’s test responses were used to train a third generation, and so forth and so on, through seven generations.

The idea—the scientists’ prediction—was that as information about alien categories was passed down from generation to generation, with errors and omissions, the initially random associations would evolve into simpler and more structured form—that is, into stereotypes. And that’s just what they found, and describe in a forthcoming article in the journal Psychological Science. It appears that social information—without will or intention—becomes organized into manageable categories as it is transmitted from person to person again and again. What’s more, over time novel stereotypes emerged that were easy to learn and to generalize to previously unseen aliens. So Blue aliens became generally sensible, while green aliens became generally vulgar—much in the same way that we use stereotypes to make inferences about strangers.

Martin and his colleagues use Scottish stereotypes to put these findings in perspective. Many cultural stereotypes contain a kernel of truth, based on genuine associations between categories and attributes. So, for example, Scots are more likely to wear kilts than are others, and are perhaps more likely to have red hair. These genuine associations are detected and amplified as they are filtered through the same cognitive biases of one mind, then another and another. But these same biases also result in the spontaneous creation of associations over time. In this way, Scots have also come to be associated with seemingly arbitrary traits with no grounding in reality—the stereotype of the miserly Scot, for instance.

These intriguing findings illuminate the origins of tidy stereotypes out of random information, and may be useful in comprehending the origin of derogatory caricatures like “redskin.” But the findings also suggest that, once a given stereotype becomes simplistic enough, it tends to become fixed—and to continue on unchanged. That’s the point at which people have to confront and challenge their own biases, as Washington football fans seem finally poised to do.

Rather than impose one group’s will on the speech of another group based on perceived relative (and often questionable) value, the Native Americans should buy the team and then call it whatever they wish. That is how it normally works in a free society.