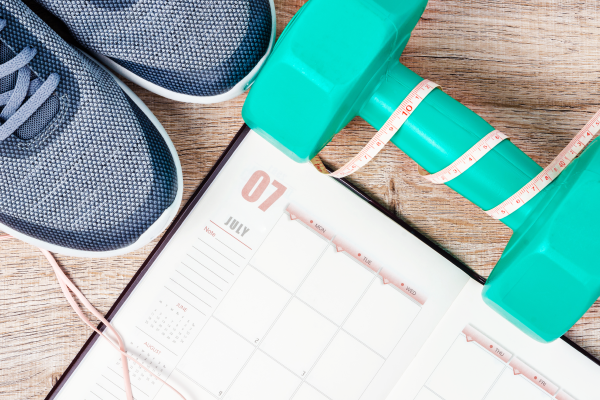 Individuals who make concrete plans to meet their goals may engage in more physical activity, including visits to the gym, compared to those who don’t plan quite so far ahead, research shows. These research findings, published in Psychological Science, suggest that self-reported levels of a trait called “planfulness’ may translate into real world differences in behavior.

Some people seem to be able to more consistently meet their goals than others, but it remains unclear if personality traits that have been found to promote goal achievement in the lab similarly encourage individuals to achieve long-term goals in their day-to-day lives, says lead researcher Rita M. Ludwig of the University of Oregon.

Conscientiousness, a measure of individuals’ orderliness and dependability on the Big Five Inventory of personality, has long been tied with healthy behaviors, notes Ludwig and colleagues Sanjay Srivastava and Elliot T. Berkman, also of the University of Oregon. Narrowing their focus to a single facet of this trait, planfulness, allows researchers to zero in on the psychological processes—such as mental flexibility, and a person’s ability to make short-term sacrifices in pursuit of future success—that contribute directly to achieving long-term goals.

“There indeed appears to be a certain way of thinking about goals that correlates with long-term progress,” Ludwig says. “What’s new in this study is that we used an objective measure of goal progress that could be recorded as participants naturally went about their lives: their check-ins at a local gym.”

Ludwig and colleagues examined this relationship by analyzing the gym attendance of 282 participants over a 20-week period. The researchers tracked the number of times each participant swiped into the campus recreation center after enrolling in the study at the start of the winter 2018 academic semester. They also retroactively collected data on gym attendance throughout the fall 2017 term.

The participants, many of whom were students, provided a written description of their exercise plans and completed measures of self-control and grit, in addition to the Big Five Inventory of personality and Ludwig and colleagues’ 30-item Planfulness Scale.

While all participants experienced a similar decline in gym attendance over the course of each semester, individuals who rated themselves high on planfulness items such as “developing a clear plan when I have a goal is important to me” went to the gym more throughout both semesters compared to those who ranked themselves lower on planfulness. The researchers found that a one point increase on the five-point Planfulness Scale corresponded with an additional 5.9 recreation center visits during the fall semester, and an additional 8.5 visits after enrolling in the study for the winter semester.

Planfulness was only significantly associated with the frequency of participants’ gym attendance during the winter semester, possibly due to participants completing their physical activity plan later in the year, the researchers noted.

“This work is broadly informative for those who are curious about how people pursue health goals, including their own patterns of thought around goals,” Ludwig says. “Clinicians might find it helpful in understanding how their patients tend to think about goals and whether person-to-person differences in such thinking are related to outcomes.”

While there was a small, but significant relationship between participant planfulness and the level of detail in their physical activity plans, descriptiveness was unexpectedly found to have no relationship with gym attendance, Ludwig and colleagues noted.

“It seems logical that people who are successful with their goals would be able to write in detail about their planning process,” Ludwig says. “We were surprised, then, to find no relationship between people’s goal pursuit behavior and how they wrote about their goals.”

Future psycholinguistic research might investigate alternative explanations for these findings, the researchers conclude.

All data have been made available via the Open Science Framework. This article has received the badges for Open Data, Open Materials, and Preregistration.

We are about to begin a 6-month RCT study of changes in DEXA measured body composition in adolescents and post-menopausal women as a function of consuming a calcium/protein dietary supplement. The study provides subjects payments for daily recording of their compliance with the study protocol irrespective of how well or how poorly they complied Although I’ve never measured it, my impression is that they all plan to comply perfectly (but few do). Pleas give me a call (210-241-4900)and see if we can work together on assessing their plans and how well they carried out.
Gil Kaats, PhD, Integrative Health Technologies, Inc. (ihtresearh.com)

It would be nice if they could predict this information!

I am currently a Psychology student and in the beginning of my Social Science course. This article is one that was chosen for the students to read on the value of research, I found it very interesting the correlations between studying and exercise. I go to the gym on a regular bases as a “get away” from studying, or before studying to get the mind motivated, and now that I have read this article, I find that my gym time is part of my weekly schedule and it has actually help my path towards a degree. Keeping my body, as well as my mind, strong and consistently active was something I figured were separate activities, but now I see it is a correlation of good habits and good health. This is something for me to take into great consideration towards my future planning to make my studies and workouts better, Thank you.