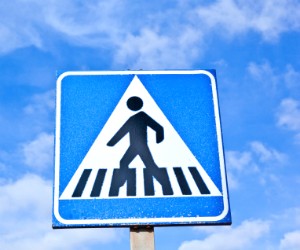 Black pedestrians are at far greater risk of being fatally hit by a car than white pedestrians, according to research from the CDC. From 2000 to 2010, the pedestrian fatality rate for black and Hispanic men was twice the rate for white men, even after controlling for factors such as socioeconomic status, location, and alcohol use.

The results of a new study reveal one factor that may help explain why – the findings suggest that whether a driver yields to a pedestrian may largely depend on a pedestrian’s race.

Psychological scientists Tara Goddard and Kimberly Barsamian Kahn of Portland State University and Arlie Adkins of University of Arizona designed a realistic field study to test drivers’ behavior towards pedestrians of different races as they crossed the street at a clearly marked “zebra” crosswalk. Overall, their results revealed that drivers were far less likely to yield to black pedestrians compared to white ones, and black pedestrians experienced wait times that were 32% longer than white pedestrians.

“Repeated negative experiences while crossing may deter racial minorities from choosing to walk, and may contribute to the danger pedestrians face at street crossings,” Goddard and colleagues writes.

For the experiment, six trained male members of the research team—three white and three black—were monitored as they used a marked pedestrian crosswalk to cross a busy downtown street in Portland, Oregon. All of the men were in their 20s, matched based on height and build, and they all wore identical outfits (a plain gray shirt and khakis).

Two trained observers stood approximately 30 feet from the crosswalk (out of sight of oncoming cars) and recorded whether the first car to approach yielded to the pedestrian, how many additional cars passed by before a driver eventually yielded, and how many seconds elapsed before the subject was able to safely cross the street.

Goddard and colleagues hypothesized that drivers may be demonstrating the effects of an unconscious prejudice known as implicit bias. While drivers may not explicitly ignoring black pedestrians on purpose, implicit racial attitudes may help explain why drivers treated black pedestrians differently than white ones.

In many ways driving is a prime activity for implicit bias to rear its ugly head. Drivers have to make decisions quickly in anonymous, complex environments—ideal circumstances for this kind of subtle discrimination.

The researchers did not track the race or gender of drivers, but suggest that looking at the interaction between driver characteristics and pedestrian characteristics would be a worth exploring in future research. Additionally, they suggest that an expanded study should directly examine how drivers’ attitudes about race affect their stopping behavior.

“Because this was a naturalistic field experiment in which drivers were not intercepted or tested directly, we are not able to make conclusions about the source of the racial bias of drivers,” the researchers caution.

While these disparities in the pedestrian experience may appear small, the researchers argue that they contribute to the myriad small inconveniences and indignities faced by minorities on a daily basis. Minority pedestrians may have more frustrating experiences at crosswalks, including more delay and increased risk, which can turn travel by walking into an unpleasant experience.

One way to combat this form of bias, the researchers suggest, may be to adopt design changes at crosswalks to make sure that motorists understand that stopping is mandatory for all pedestrians.

Your design is weak and data collection is poor at best.
You have no info on the drivers demographics, no time of day when people may be more or less rushed, no info on back ground experience of each(unidentified driver) with only blacks, whites- males at cross walks or anywhere else.
You don’t even have anecdotal info from drivers as to what they thought and why they thought they might have acted the way they did.
You assumed black males would receive poorer treatment than white/black females and white males etc
Unconscious bias come on that’s not even validated empirically.
You had your conclusions before collecting the data.

Vey poor design and methodology and you practically projected your own bias onto your results.

I couldn’t even force myself to read the article closely it was so blatantly biased with conclusions drawn prior to the study.

This shouldn’t even qualify for a BA Sr project.

Listen here “Jennette”, you need to calm down and take a bubble bath or something.