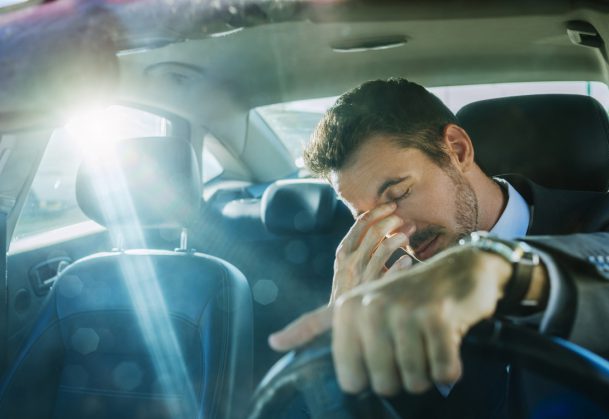 Drowsy driving may receive less media attention than drunk driving, but research shows that it’s startlingly common and can be just as dangerous as driving while drunk.

A 2010 poll from the AAA Foundation found that 41% of American drivers has fallen asleep at the wheel at least once. The National Highway Traffic Safety Administration estimates that 100,000 crashes are the direct result of driver fatigue each year, resulting in an estimated 1,550 deaths, 71,000 injuries, and $12.5 billion in damages.

Unlike drunk driving, there are no specific measures available for determining when one is too sleepy to drive safely. Instead, drivers are cautioned to assess their own levels of sleepiness and to pull over for a break when they feel too tired. But are sleepy drivers accurate in deciding when they’re just too tired to drive safely?

A team of psychological scientists led by Ann Williamson of the University of New South Wales designed a study to find out.

Participants for the study spent two hours using a driving simulator on a road that was purposely designed to be monotonous, with few curves and little scenery. To ensure that participants were sufficiently sleepy for the study, they were asked to stay up late the night before the experiment so that they would have no more 5 hours of sleep.

Groups of 30 participants were then assigned to one of three conditions. In a “no prompt” condition, drivers were asked to push a button on the steering wheel whenever they felt that they were so sleepy they were likely to crash.

The researchers found that there was no significant difference in dangerous driving between the three conditions.

But, as expected, people who felt sleepy truly were more dangerous on the road. Drivers who rated themselves as being sleepier, regardless of the group they were in, crashed their cars at four times the rate of drivers who didn’t report feeling tired and they crossed the center line 10 times more often.

“These results confirm that fatigue and sleepiness and even the risk of falling asleep do not just take drivers unaware. Rather they show that drivers do know that they are fatigued and sufficiently sleepy to possibly fall asleep while driving,” writes Williamson and colleagues in the journal Accident Analysis and Prevention.

The researchers note that although drivers seem to be aware of the symptoms of excessive sleepiness, that doesn’t mean they automatically equate feeling sleepy with an increased risk of crashing.

These findings have important implications for driver education, suggesting that driving instruction educational materials should emphasize that feelings of fatigue and sleepiness are important indications of crash risk that should not be ignored.

News > Minds on the Road > Can People Tell When They’re Too Sleepy to Drive Safely?

I truly feel most people know when they should stop driving, but they keep on anyway.