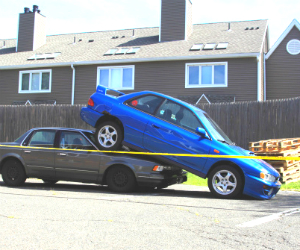 Here’s my personal experience from my family and friends (Mostly Chinese with a few Vietnamese and Koreans.

Our parents immigrated to the US as adult. Most of them never had a car in the mother country. Some got a license but never drove or had a car because public transportation is readily available in the densely populated location and tax on car are insanely high to curb the sales. Anyway most of our parent didn’t drive until their 30’s and 40’s. It was a new location in a different language so majority of the time they are driving like they were lost. With enough of these drivers on the road, it’s not surprising that that stereotype would take hold.