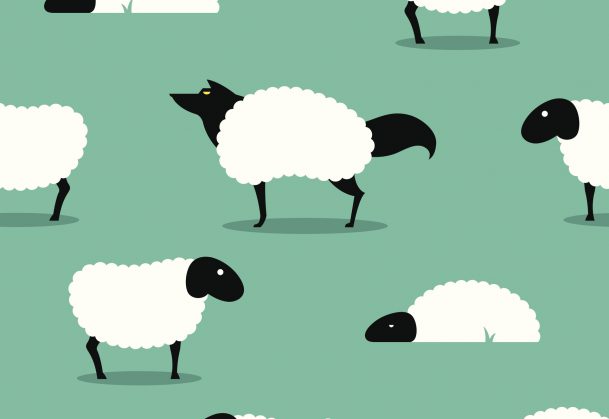 Think your boss is a psychopath? You may be right. New research finds that employees who displayed certain Dark Triad traits – psychopathy, narcissism, and Machiavellianism – are more likely to climb to the top of the corporate ladder than those who don’t show the traits.

University of Bern psychological scientists Daniel Spurk, Anita Keller, and Andreas Hirschi conducted the new study, concluding that high scores on some of these malignant traits were linked to better career prospects, including more leadership positions and higher salaries.

Even though the Dark Triad traits are associated with negative behaviors (e.g., lying, cheating, recklessness, manipulation) that can cost businesses billions, research also suggests that ruthless corporate climbers with the traits can also be charming, ambitious, and excellent negotiators.

The researchers hypothesized that some of these sinister traits may help people succeed, while other traits may hinder career advancement. For example, people with high scores of Machiavellianism tend to crave power, control, and status — hence, they tend to actively pursue leadership positions and prestige. On the other hand, nobody likes working with a selfish jerk — Psychopaths often have difficulty working with other people, and are prone to impulsivity.

Spurk and colleagues collected surveys from a large sample of nearly 800 working German adults between the ages of 25 and 34.

Each of the participants was given a frequently used measure for Dark Triad traits known as the “Dirty Dozen” measure. The survey asked participants to rate the extent to which they agreed with statement such as ‘‘I tend to want others to pay attention to me’’ (for narcissism), ‘‘I tend to lack remorse’’ (for psychopathy), and ‘‘I tend to manipulate others to get my way’’ (for Machiavellianism).

Respondents then provided their monthly salary before taxes and leadership position within their organization, and completed a short self-report survey on their career satisfaction. In their analyses, the researchers also took various other  factors that could influence career success, like gender, job tenure, working hours, and occupational education, into account.

Sure enough, the results suggest that certain dark traits really do help people get ahead.

“Whether bad guys get ahead or fall behind seems to depend on the type of dark trait,” the researchers write in the journal Social Psychological and Personality Science. “After controlling for other relevant variables (i.e., gender, age, job tenure, organization size, education, and work hours), narcissism was positively related to salary, Machiavellianism was positively related to leadership position and career satisfaction.”

The findings indicated that people who scored high on psychopathy, on the other hand, didn’t fare as well. The researchers found a negative association between psychopathy and successful career outcomes.

As psychological scientists Robert Hare and Paul Babiak explain in their book on psychopathy in the workplace, Snakes in Suits: When Psychopaths Go to Work, “The most debilitating characteristic of even the most well-behaved psychopath is the inability to form a workable team.”

Though psychopaths may be charismatic, smart, and talented, this inability to play well with others often prevents them from obtaining high levels of career success.

Interestingly, a comprehensive review on successful psychopaths recently conducted by Emory University psychological scientists Scott Lilienfeld, Ashley Watts, and Sarah Smith found that some psychopaths may possess distinctive traits that make them more likely to become successful leaders. While the bulk of psychopathy research has focused on prison populations, Lilienfeld and colleagues looked at research on people with psychopathic traits who also obtained professional success. These “successful psychopaths” tended to have higher scores on assertiveness, excitement-seeking, and conscientiousness compared to unsuccessful psychopaths.

Additional research on the mixed outcomes of the Dark Triad may help explain why so many organizations end up with a destructive Tony Soprano or Frank Underwood at the top.

News > Minds at Work > Why Office Jerks Get Ahead

I feel like you misused psychopath. “Psychopaths often have difficulty working with other people, and are prone to impulsivity.” These traits are more associated with sociopaths; who tend to have more difficulty controlling emotions.

“It’s not easy to spot a psychopath. They can be intelligent, charming, and good at mimicking emotions. They may pretend to be interested in you, but in reality, they probably don’t care.”

“Sociopaths are less able to play along. They make it plain that they’re not interested in anyone but themselves. They often blame others and have excuses for their behavior.”

A sample of research exploring personality and psychopathology, the relationship between attention and depression, and the influence of social anxiety on social behavior in competitive contexts. More