The over-65 set is not only increasing in numbers (by 2030 the percentage of people age 65 and older is expected to increase from almost 13 percent to almost 20 percent, according to data from the Stanford Center on Longevity). They are also healthier and more active than in previous generations. That means many of them will be working longer than a generation ago. Does their increasing presence in the workplace predict an increase or decrease in ageism?

Psychological researchers are stepping up research on bias against older adults as part of an effort to break stereotypes on aging and curb age discrimination. 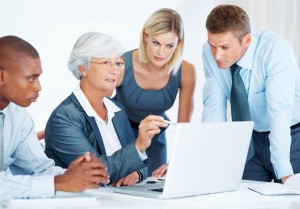 In the workforce, older employees are viewed as having many more negative traits than positive ones, as a meta-analysis in 2011 in Journals of Gerontology, Series B: Psychological Sciences and Social Sciences demonstrates. The analysis included field and laboratory studies dating back to the 1970s. Age negatively affected advancement, selection, evaluations, and ratings of interpersonal skills. However, it had a positive effect on ratings of reliability. These attitudes toward older workers held true over the decades and have showed no signs of abating, says coauthor Cort Rudolph, an industrial and organizational psychologist now at St. Louis University.

But psychological scientists are only now studying traits that improve with age, and could serve as assets in work settings. Compared to younger workers, older people tend to be more knowledgeable, have more experience, have greater emotional stability, and are better able “to stand back and see the big picture,” Princeton University psychology professor Susan Fiske said in an interview for the website Over 50 and Out of Work.

New data suggest that both day-to-day and within-day variability in cognitive performance are particularly low in older adults when compared to younger adults.

Florian Schmiedek, Martin Lövdén, and Ulman Lindenberger examined these questions using data from the COGITO Study, an investigation conducted at the Max Planck Institute for Human Development in Berlin. Their results are published in Psychological Science, a journal of the Association for Psychological Science.

Please identify the author of this article as I need it to complete my citation on a research paper.
Thank you.
Joseph Linn