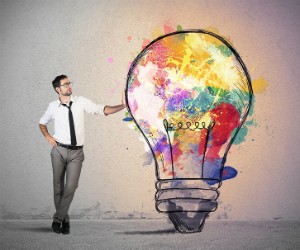 Great leaders make smart decisions, even in difficult circumstances. From Albert Einstein to Oprah Winfrey, many top leaders ascribe their success to having followed their intuition. New research shows how going with our gut instincts can help guide us to faster, more accurate decisions.

Intuition — the idea that individuals can make successful decisions without deliberate analytical thought — has intrigued philosophers and scientists since at least the times of the ancient Greeks. But scientists have had trouble finding quantifiable evidence that intuition actually exists.

Now, a team of researchers from the University of New South Wales has come up with a novel technique demonstrating just how much unconscious intuition can inform — and even improve — our decision-making. The research team — psychological scientists Galang Lufityanto, Chris Donkin, and Joel Pearson — recently published their findings in Psychological Science.

“Many people use the phrase ‘intuition’ to describe a sensation or feeling they have when making decisions, but these are only descriptions, they don’t provide strong evidence that we can use unconscious information in our brain or body to guide our behavior,” Pearson explains. “This is the first time we have been able to show strong evidence that something like intuition does actually exist.”

To measure intuition, the researchers designed an experiment in which participants were exposed to emotional images outside conscious awareness as they attempted to make accurate decisions. The results of the study demonstrate that even when people were unaware of the images, they were still able to use information from the images to make more confident and accurate decisions.

“These data suggest that we can use unconscious information in our body or brain to help guide us through life, to enable better decisions, faster decisions, and be more confident in the decisions we make,” Pearson says.

In the experiment, groups of college students were shown stimuli composed of a cloud of many moving dots, which looked like the noisy “snow” you might see on an old TV. Participants had to report which general direction the cloud of dots was moving in, left or right.

Participants were fitted with a mirror stereoscope during the experiment, which allowed the continuous flash suppression to mask emotional images in the other eye.

The emotion-provoking photographs included both positive images, like adorable puppies, as well as disturbing negative images, such as a snake about to strike. The type of image, positive or negative, indicated which direction the cloud of dots was moving.

Across four different experiments, Pearson and colleagues found that people were able to make faster and more accurate decisions when they unconsciously viewed the emotional images. Essentially, people’s brains were able to process and utilize information from the images to improve their decisions.

“Another interesting finding in this study is that intuition improved over time, suggesting that the mechanisms of intuition can be improved with practice,” Pearson adds.

Additional evidence for intuition came from participants’ physiological data. In one experiment, the researchers measured participants’ skin conductance — an indicator of physiological arousal — as they made decisions about the swarm of dots. In an exciting finding, the researchers observed that skin conductance predicted behavioral intuition; that is, even when people weren’t aware of the images, their bodies showed a physiological reaction to the emotional content of the stimuli.

According to Pearson, the ability to quantitatively measure intuition could be a boon to many different fields, especially when it comes to workplace hiring: “This could be applied in the workplace, taking the place of existing questionnaires which really only test people’s opinions about their own feelings of intuition. We do have intuition and we can measure it scientifically.”

News > Minds at Work > Intuition – It’s More Than a Feeling

I would like to know more..I mean, its very interesting, although not novel, that events in the environment bypass the cold hard mechanisms of the intellect. however, that intuition is associated with learning – i.e. ‘Improved over time’ is surely a given. Was there a difference in how people classified in terms of the positive v the negative images, for instance? What tests were done and what sample used. As a work psychologist it is indeed interesting and anything which gets us past the over-used questionnaire is good to me!

I read the journal article and, although interesting it raised more questions than it answered. The subliminal emotional cues might have increased the subjects level of alertness a bit which might explain the increase in performance. Lets face it, looking at computer generated snow for 144 tests has got to be way boring. Increased alertness does not, in my mind, connote intuition.

I agree wholeheartedly with your expansion of the term, intuition. I am an older woman who has always had trouble making decisions(both big and little, I guess I’m somewhat of a perfectionist on my Capricorn side), not every single one of course, but some days are ‘easier’ than others depending on my mood, sleep, etc. Many moons ago I had a psychiatrist tell me, “Make a decision, even if it’s wrong!” Of course, that’s how we learn.
Just in the last few years, I have attempted to consciously listen to my intuitions/gut feelings, on both little and large situations. I have been happily surprised to find that it works! Glad to know there’s a part of my brain that is smarter than the one I work with every day:) Makes me wonder further if it gets ‘wiser’ with age? Or maybe it’s that it allows more access to the unknown with use! Didn’t the Egyptians study something similar to this?

Very valid point, the real question is if science already knows about it and has condoned its own research and discover things that could int public be disclosed in hopes of keeping it a secret to prevent social collapse. The truth about intuition is the fact that it cant be measured by numbers, it doesn’t show up on a chart so systematically it cant be proven. Now thats where it begins , our mind is everything, its the gateway to anything and everything. Limitations have been set on us from mainstream society and proclaimed that we live a certain way, and religion is forced upon us and if we think otherwise we go to hell, ANYWAYS like you said it’s universal it has no origin other than itself. Now once you discover more and more about this type of one fullness you’ll start to have a early feeling that someone is watching you. Listening to you or is detecting your vibrational energy. You must be careful with who you talk to about certain subjects. If not there will be consequences from a unknown party.

A similar process is searching for a queen in a deck of cards. No, no, no Yes! This is based on recognition of what we already know.

Similar to searching a deck of cards, success is highly dependant on tossing one viewpoint after another searching for a perspective which reveals an answer we already know is true. Recognition.

The process I utilize to override reason which wants to hold and analyze each is to develop tools which generate new perspectives.

e.g. Based more on recognition than reason.

I want to research on intuition but qualitative not quantitative .I really like this topic but I have no any idea how I can start research about intuition if you guide me the main concept and procedure like sample and also how can I conduct a research and also making report. I really need your guidance B’coz I submitted the report in my university.

The research on intuition dovetails with my experience as an intuitive artist. When I fight the desire to control the outcome of a painting, the result is more interesting, creative and amazingly accurate.
As an artist, the ability to tap the wealth of knowledge and a lifetime of experience at the subconscience level often reaps delightfully surprising results. This ability appears to increase with practice.

What i have learned throughout my long 16 years of life, specifically from my 8th grade history teacher, is that you need to trust your gut. She told me that if i were to second guess myself on the test that i would get the answer wrong an to always go with my first answer. Now i have a better understanding of my intuiton, your intuition always has your best intrest in mind. Your best decison, its just being a matter of trusting yourself and going with your own flow. Now once you do that youll realize how powerful this can be , it can detect danger, get you out of bad situations , like you have two or three seconds before something happens and its as if you know it coming right before it happens so you have the window to make a proper decision. Souly my opinion but i feel we get this from our ancestors who were primates. They had to be able to detect and make decisions quick. If not the ones who were slow, died out. If you take anything out of this it would be to trust yourself and you will be welcomed with a reassurance that everything fits right in and everything have a specific universal timing that can be PREDICTED .