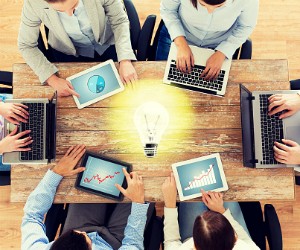 You’re a manager tasked with putting together a team to tackle a new project. What qualities do you look for in creating such a crack team?

Research from psychological scientists Anita Williams Woolley (Carnegie Mellon University), Ishani Aggarwal (Fundação Getulio Vargas), and Thomas Malone (Massachusetts Institute of Technology) finds that the smartest groups don’t necessarily have the highest IQs – rather, what they do tend to have are excellent social skills.

For over a century, psychological scientists have found that individuals who perform well on some tasks also tend to learn quickly on others and researchers have developed so-called IQ tests in an attempt to measure this underlying “general intelligence.”

Initially, Woolley and colleagues assumed that teams with higher average IQs would outperform teams with lower average IQs. But, to their surprise, they found that putting lots of people with high IQs in one group did not guarantee that the group itself would have high collective intelligence.

Instead, their studies revealed that social skills were much better than IQ at predicting a group’s collective intelligence. Social perceptiveness was measured by people’s ability to judge others’ emotions based on pictures of their eyes. Groups with members who were highly socially attuned — that is, good at reading emotions — were more collectively intelligent than other groups.

The results suggest that social perceptiveness allows group members to communicate more effectively, ultimately allowing the group to capitalize on each member’s skills and experience.

“The most important things we have observed so far are that more collectively intelligent groups communicate more and participate more equally than other groups,” the researchers write in Current Directions in Psychological Science. “In other words, groups in which one or two people dominated the activity were, in general, less collectively intelligent than those in which the activity was more equally spread among group members.”

Indeed, Woolley, Aggarwal, and Malone found that collective intelligence was associated with the total amount of spoken communication within groups, regardless of whether the group members interacted face-to-face or through written communication online.

In one study, Woolley and colleagues tracked group test performance in teams of management students across two months. They found that teams that were highly collectively intelligent earned significantly higher scores on their group assignments, even though their members did not do any better on the individual assignments.

“Furthermore, the highly collectively intelligent teams exhibited steady improvement in performance across the series of tests, suggesting that the teams got better at retaining information collectively and applying it to their assignments over time,” the researchers explained.

While this is interesting, it is not a new finding. The work of Meredith Belbin some sixty years ago demonstrated the same thing. Today, we might translate his ‘team types’ into social roles or collaborative networks, but we’re describing the same thing: being able to work well with others to achieve a shared goal is not only fed by individual IQ. To call it ‘collective intelligence’ is one way of describing it; and anthropologist would simply say people had learned social customes that facilitate cooperation. Correlation with face-to-face communication follows naturally. Maybe it’s too much to expect that half-century-old findings would be used in a study that conclude that folk “got better at retaining information collectively and applying it to their assignments over time.” Ironic, I thought. Yet maybe it will spur use of this phenomena by others. That would be good!

I’m partially agree on O’Connor, however the Factor C, allow us to discover new tracks about the group behaviours and their measures in different field education, health, artificial intelligence and so on….

Truly interesting. While very valuable, the paper did not explain how well does collective intelligence fares against individual intelligence. Is a team’s performance better than an individual’s`? Can we measure that? It seems a relevant avenue of research since there is a) an increasing array of problems that show a level of complexity that overwhelms an individual mind (climate change) and b) we are moving towards greater teamwork to solve such challenges.