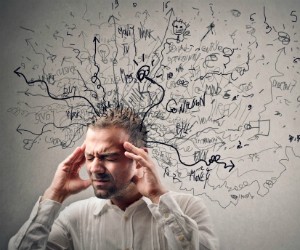 While someone is zoning out, their mind isn’t just blank. Instead, people who are daydreaming may be intensely ruminating on their future accomplishments, hopes, and goals. Research on daydreaming and other mind wandering has shown that this can help people generate innovative solutions to problems, an idea that the business world has started catching on to. But research is also showing that daydreaming can have a dark side.

Several studies have shown that spontaneous thoughts can be open and expansive, allowing the mind to creatively “wander” through different topics, helping people come up with expected solutions to problems. But a recent article in Clinical Psychological Science, shows how the kind of spontaneous thoughts that just pop into our heads can sometimes have negative consequences.

According to Igor Marchetti (Ghent University) and colleagues, individuals who struggle with negative emotions or who are under intense stress are particularly vulnerable to negative thoughts when their minds wander. When an at-risk individual is struggling to accomplish a goal, their spontaneous thoughts and daydreams may take a dark turn. Instead of open-ended wanderings, they may get locked into a repetitive, negative train of thought that produces thoughts like “I’ll never find a job,” “the boss hates me,” or “I’m going to screw up this big presentation.”

“In other words, a powerful and negative emotional reactivity to internal cues has the capacity to lock the train of thoughts into a thematically narrow content channel (i.e., funneling effect) and to substantially reduce the breadth of the associative network,” the researchers write.

Marchetti and colleagues note that these repetitive, negative thoughts share many of the features of cognitive risk factors for depression. Consequently, for at-risk individuals, mind wandering and daydreaming may pave the way toward depressive symptoms or other mood disorders. And studies suggest that may be especially true when they engage in daydreaming, rather than problem solving, as a response to stress.

“Many findings indeed report that well-known mechanisms leading to depression, such as rumination, hopelessness, low self-esteem, and cognitive reactivity, are consistently associated with daydreaming and are likely to exacerbate negative mood in individuals,” they explain.

“This interpretation is supported by findings that pleasant activities brightened mood and reduced rumination in depressed individuals, presumably by interrupting their ruminative train of thought because the positive distraction overrides the existing cognitive processing priority, and this mood-brightening and rumination-reducing effect was especially marked in more highly depressed individuals,” the researchers explain.

A recent meta-analysis suggests that there might be a neurobiological reason for this, suggesting that socioemotional processing and spontaneous thoughts may rely on common brain areas.

Researchers have developed specific counseling techniques to help people who are coping with negative thoughts. The counseling aims to reduce commitment to unrealistic or self-destructive goals, and to instead direct the person towards more adaptive, less stress-provoking goals.

“Longing for unrealistic, overvalued, unreachable goals or being reluctant to relinquish them (once failed) are both likely to cause mental distress and should, in turn, be targeted by clinical interventions,” the researchers conclude.

Nowadays I feel frequent headaches,and difficulty in breathing can these be linked to me daydreaming about relationships gone wrong

I find this article truly helpful, plus a confirmation to how i now feel as a dreamer.. at first it was quite fun, drifting beyond reality, being someone your not, living inside a world i had created.. but slowly those dreams i had took the better pieces of me and became a false reality. Living inside the mind made reality look even harder than it really is. Then the mood starts swinging, overthinking crawls in, then sooner or later, depressions knocking on the front door. And with all those bullshit which haven’t even occured yet.. all i could ever think of is an escape(Daydreaming my ass off).F**king start the cycle again, and again and again and again. Tired, really tired. I can honestly say dat Ive been to the dark side. But now i’m trying to my way out. A little advice would be helpful..

Hi Sunny side up
the best way to beat daydreaming is to try to focus on the present moment,
i may be seem overwhelming at first but when you try to your best to stick as much so you can you are more aware of what is around you everything seems crystal clear to you i advice to read a book the power of now of eckhart tolle just to see what it looks like
wish you the best