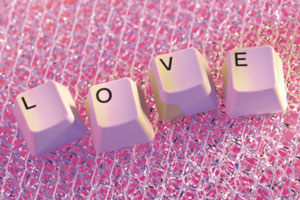 Eli Finkel, a social psychologist at Northwestern University, is one of five authors on a new study published in the February issue of Psychological Science in the Public Interest. The study, ‘Online Dating: A Critical Analysis from the Perspective of Psychological Science‘ is co-authored by Paul Eastwick of Texas A & M University, Benjamin Karney of UCLA, Harry Reis of the University of Rochester and Susan Sprecher of Illinois State University.

We invited our Facebook and Twitter followers to submit their questions on love, relationships and online dating to Finkel. Here is the first part of his response. Stay tuned for Part 2 later this week!

If you and your better half filled out online dating questionnaires, is it possible that you might not even be matched on an online dating site?

That is not only possible, but likely. Consider this scenario: You and your spouse live in Denver and are both 35 years old. If you were single, you would both be willing to meet people from 30 to 40 years old and within 10 miles of your zip code. On a major self-selection site, you would have, say, 2,000 people of your preferred sex in that age range.

An algorithm-selection site might claim to cut this pool of 2,000 down to the 10 who are especially compatible with you. Now, if the site’s algorithm is effective, that’s a spectacular service. Here’s the problem: Our reviews of the available information about current algorithms (spearheaded by PSPI co-author Sue Sprecher) and of 80 years of relationship science (spearheaded by PSPI co-author Ben Karney) suggest that no current algorithm does much better than chance. What that means is that your pool of 2,000 potential partners has been whittled down to 10 potential partners, but—and this is crucial—this whittling process doesn’t seem to be much better than random.

Does corresponding with someone online start a relationship out right? Or do you think online communication can hurt the beginning of a relationship?

It is hard to know whether this sequence of events would impact relationships in the long term. Other research by Eastwick (as well as by relationship scientist Garth Fletcher and his collaborators) has suggested that people generally start to consult their ideal partner preferences as a relationship progresses beyond the initial dating stage. So it is entirely possible that the use of online dating profiles is changing who we’re getting coffee with, but it’s ultimately irrelevant to establishing whom we end up dating in the long run. In any case, there is much that remains to be learned about how relationships formed through online dating ultimately differ from those formed through more “traditional” means.

While you say that these algorithms can’t predict long-term success, can they predict anything at all?

Our review of the literature suggests that current matching algorithms can’t predict very much about the compatibility between two people. I wouldn’t be surprised if they can predict initial interaction style (e.g., who talks more) and, to a lesser extent, initial attraction, but I wouldn’t put a great deal of stock in such effects.

For example, scholars and laypeople alike have long assumed that people tend to be romantically attracted to others to the degree that those others are similar to them. However, much of that research is limited in certain respects. In particular, it often examines perceptions of a hypothetical other person whom one has only “met” on a questionnaire rather than an actual, flesh-and-blood person one has met face-to-face. Other research demonstrates that people are attracted to others whom they perceive to be similar to them, but that finding is irrelevant to dating sites that use matching algorithms because the two people are not even aware of each other’s presence when they fill out the matching questionnaires and therefore cannot report on perceived similarity.

Natasha Tidwell recently spearheaded a rigorous study of the link between similarity and initial romantic attraction. This study, on which Paul Eastwick and I were co-authors, used speed-dating methods and allowed Tidwell to distinguish perceived from actual similarity. The results revealed huge effects for perceived similarity, such that people are especially attracted to potential partners whom they perceive to be similar to them. In contrast, the results revealed null effects for actual similarity—which was calculated as the degree of similarity of two people based on questionnaires each of them completed two weeks before the speed-dating session. Several other studies converge on the conclusion that actual similarity is a weak or nonexistent predictor of initial attraction to a potential partners one has actually met in person.