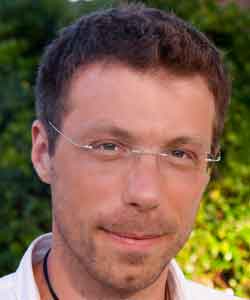 My research focuses on two questions confronting the most characterizing aspects of the human mind: 1) “What is the relationship between language and thought?” and 2) “How and why is consciousness lost and (sometimes) recovered after severe brain injury?” With respect to the first question, I focus on high-level cognition, including arithmetic and music cognition, and logic inference. Does the structure of natural language provide a scaffolding upon which we developed structure-dependent thought in other domains of cognition? With respect to the latter question, I am interested in what aspects of brain structure and function underlie the loss of consciousness in patients in coma and in a vegetative state, and the potential for its restoration.

Well, I have a very classical education, so the issue of the relationship between language and other aspects of our mind probably comes from studying ancient philosophy -— and has just stuck. In a form or another, I have been curious about the topic long before I even knew I could make a living studying it. In fact, even as an econ undergraduate, I once wrote a whole essay on the development of language in humans. Perhaps a bit off topic back then, but interesting nonetheless I thought. The topic of consciousness has also long fascinated me, but I must admit that the specific aspect I am working on today is the fruit of a delicate balance between curiosity, philosophy, good timing, and just sheer luck. Exciting? Can it get any more exciting than confronting the two most characterizing aspects of who we are as a species?

If I had to pick just one thing, I would say that the greatest luck I’ve had in my career is the exceptional people I’ve learned from. So the little good I’ve done is certainly to blame, in great part, on Prof. Daniel Osherson, my graduate mentor at Princeton University, Prof. Adrian Owen, my mentor during a three-year post doc in Cambridge, UK, and Prof. Lawrence Parsons. This said, the number of thoughtful people I have learned from is much, much larger. For one, Ramon y Cajal’s Advice for a Young Investigator is a quick read I strongly recommend to all junior (and “less junior”) investigators.

The overarching questions are still the same, but in the past two years my research has started taking novel directions. In the domain of consciousness I’ve been migrating towards a more quantitative understanding of the link between brain structure/function and consciousness, by measuring structural changes and principles of brain function after severe injury. In the domain of language and thought, after having reported dissociation between the neural basis of language and that of other aspects of structure-dependent thought, I feel I went back to the drawing board to ask a more fundamental question: What information is actually represented within the neural circuitry of language?

The next one! Until then: