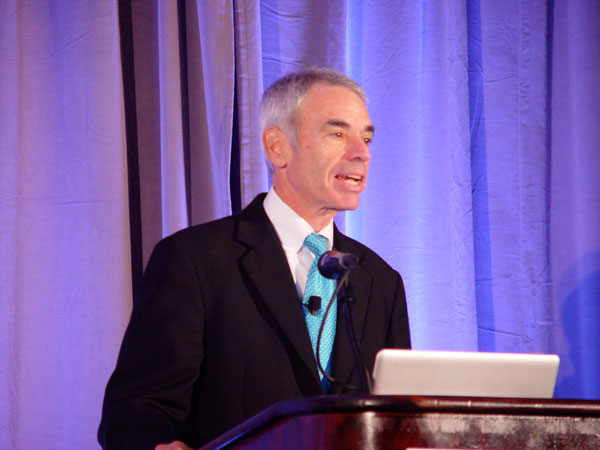 We may inherit a good deal of our intelligence, but that doesn’t mean a person can’t get any smarter. That is the upshot of the ongoing cognitive research presented by John Jonides of the University of Michigan during the William James Fellow Award Address this morning at the APS 23rd Annual Convention.

“Fluid intelligence is often thought to be highly heritable, and some people draw the conclusion that it is immutable, and I hope to disabuse you of that idea today,” Jonides said.

Fluid intelligence is generally defined as the ability to solve problems that require more than mere factual retrieval — for example, seeing a matrix of images with one space open, and deciding what image fits best in the empty spot.

Jonides has found that training a person’s working memory — his or her ability to retrieve information easily despite distractions — can lead to improvements in fluid intelligence.

In one study Jonides trained people on what he calls an “n-back” task. This working memory task presents a series of items and requires a person to recall if the current item also occurred two or three items earlier. (The number of spaces between repeated items increases as the training progresses.)

Participants who trained well in this task over several weeks demonstrated significantly improved performance on fluid intelligent tests up to three months later, Jonides reports. Such results have led him to wonder if working memory tasks might do for the brain what drugs do for the ailing body.

“[The results] heartened us about the possibility of being able to improve fluid intelligence in much the same way that pharmacological agents might be used to improve some pathological condition,” Jonides said.