Not Quite Human: Teaching Students Why Blatant Dehumanization Exists

Say It Out Loud: The Production Benefit in Human Memory

Not Quite Human: Teaching Students Why Blatant Dehumanization Exists

From ancient Egypt to the Holocaust and the Rwandan genocide, people have dehumanized others. Across human history, blatant dehumanization has fueled war, genocide, enslavement, and torture. In recent years, psychological scientists have assumed that few people explicitly endorse dehumanizing attitudes, which has led to the widespread study of subtle and implicit forms of dehumanization. What few people realize, according to Nour Kteily and Emile Bruneau (2017a), is that modern life still contains widespread blatant dehumanization.

Blatant dehumanization begins when people rob others of traits and abilities that separate lower-level animals from fully evolved humans: the ability to plan, to think logically, or to have human-specific traits and emotions (e.g., shame, guilt; Leyens et al., 2000; Haslam, 2006; Waytz, Cacioppo, & Epley, 2014). Stripping people of their humanity makes it easier to harm them. Blatant dehumanization of Muslims and Mexican Americans, for example, predicts greater acceptance of policies that harm members of both groups: a Muslim travel ban and building a wall between the United States and Mexico (Kteily, Bruneau, Waytz, & Cotterill, 2015; Kteily & Bruneau, 2017b).

Threat. Compared with those who make us feel safe, people who seem to threaten our safety or resources appear less than human. For example, blatant dehumanization toward Arabs increased in the wake of the Boston Marathon attack (Kteily et al., 2015).

To bring this cutting-edge research into the classroom, instructors can complete the following activities. In the first activity, ask students to guess in which year each of the following statements were made. Please warn students that each statement conveys the dehumanization of members of certain groups. These statements are offensive and are only included to educate students about blatant dehumanization. Assure students that participation is voluntary.

Activity No. 1: When Did They Say It?

“The personification of the devil as the symbol of all evil assumes the living shape of the Jew.”

“They are devils. They are subhuman.”

“We’re showing this parasitic class of antiwhite vermin that this is our country.”

Activity No. 2: Test Yourself

Next, ask students to read and respond to the following instructions (modified slightly from Kteily et al., 2015):

Instructions: People can vary in how human-like they seem. Some people seem highly evolved, whereas others seem no different than lower animals. Using the image below, indicate how evolved you consider the average member of each group to be (0=left, least evolved to 100=right, fully evolved): 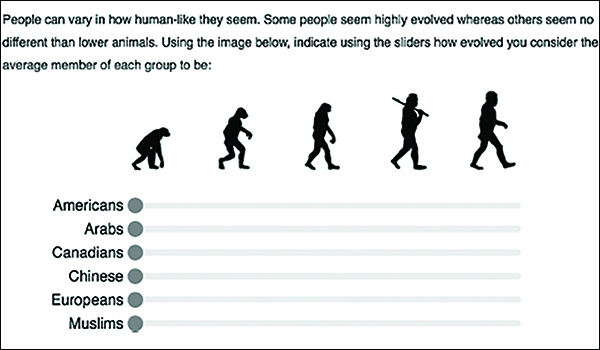 Ask students to form pairs and discuss their responses. Why would any group receive a rating of less than 100? What does that say about how we view members of other groups? How might you rate people who are Nazis, serial killers, members of a terrorist organization, or convicted child abusers? How might you rate people who have physical or intellectual disabilities, who often experience discrimination and exclusion because others dehumanize them (Sherry & Neller, 2006; Taylor, 2011)?

At its best, psychological science operates outside of political preference. Psychological scientists who identify as liberal, libertarian, conservative, or independent use the same scientific method to sift intuitive fiction from empirical fact. It’s true that the world has never been so peaceful (Pinker, 2011). But we must also accept the evidence that our peaceful world still contains — and, in some ways, encourages — the blatant dehumanization of certain groups. This puts us on a path of digression, rolling us back to a civilization where people opt for conflict rather than cooperation. Members of all groups are fully evolved humans. Recognizing each other’s humanity will help turn the tide of blatant dehumanization that threatens to devastate the peaceful world we have worked so hard to create.

Say It Out Loud: The Production Benefit in Human Memory

by Cindi May and Gil Einstein

Memory defines human identity. Memory enables our knowledge of who we are and how we are linked with other people and places. Memory begets our sense of personal continuity from day to day, even moment to moment. Small wonder that scientists have sought to understand memory and to identify strategies for enhancing it.

One such strategy, largely ignored until recently, is the production effect. It was first discovered by Ronald Hopkins and Richard Edwards (1972) and later named and popularized by APS Fellow Colin MacLeod, Nigel Gopie, Kathleen Hourihan, Karen Neary, and Jason Ozubko (2010). The production effect refers to a simple, robust, and long-lasting psychological process: Producing
words — by speaking them aloud, writing them, or even simply mouthing them — yields better memory than does reading them silently.

Next, ask students what other manipulations might yield a similar effect. Recent studies indicate that memory improves not only when words are spoken aloud or silently mouthed, but also when they are handwritten, typed, sung, or spelled out (e.g., Forrin, MacLeod, & Ozubko, 2012; MacLeod, Gopie, Hourihan, Neary, & Ozubko, 2010; Quinlan & Taylor, 2013). Even just imagining typing a word can produce better memory than simply reading it (Jamieson & Spear, 2014). The production effect also extends beyond single words to textbook passages and spoken dialogue. In addition, production need not be self-production, as a small but reliable benefit occurs when the words are spoken by someone else (MacLeod, 2011). As students generate possible alternative manipulations for creating the production effect, ask them to consider why they think their manipulations would improve memory. Review the existing findings and have students generate hypotheses about the potential mechanism(s) underlying the effect.

This exercise helps to remind students that psychological science is an investigative pursuit. Memory researchers are not merely interested in identifying strategies for boosting memory performance — they want to understand what these strategies reveal about why we remember what we do.

The production effect disappears when recall is compared for a list in which all the words are spoken versus a list in which all the words are silently read (that is, a between-list rather than a within-list manipulation). Thus, if half the class reads an entire list out loud, and the other half reads the same list silently, free recall of the list will be equivalent across groups (Forrin & MacLeod, 2016). These recall data suggest that one potential mechanism contributing to the production effect is relative distinctiveness: The act of producing a word may create a distinctive memory that makes the word more memorable relative to a word that was not produced. Of course, relative distinctiveness is only possible in a within-list design; in a between-list design, all of the words in a given list are produced, so none is more distinctive than the others, thus eliminating the production effect.

As is the case with many psychological phenomena, the story is not quite that simple; relative distinctiveness cannot fully account for all the extant data. For example, the production effect is evident, albeit reduced, in a between-list design when a recognition test rather than a recall test is used (Forrin & MacLeod, 2016). This example creates a useful opportunity to discuss the different processes that may underlie recall versus recognition, and the need for multiple dependent measures when trying to understand human memory. Ask students to generate additional explanations that could contribute to the production effect and that might differentially influence recall and recognition.

From the moment we awaken until we fall asleep at night, memory drives our understanding of the world and our place in it. Further study of the production effect may allow us to apply the effect in everyday settings, and to shed light on the processes underlying human memory.

Waytz, A., Cacioppo, J., & Epley, N. (2014). Who sees human? The stability and importance of individual differences in anthropomorphism. Perspectives on Psychological Science, 5, 219–232.

C. Nathan DeWall is a professor of psychology at the University of Kentucky. His research interests include social acceptance and rejection, self-control, and aggression. DeWall can be contacted at nathan.dewall@uky.edu.

Cindi May is a professor of psychology at the College of Charleston. Her research explores ways to enhance memory and cognitive functioning for older adults and individuals with intellectual disabilities. She can be contacted at mayc@cofc.edu.

Gil Einstein is the William R. Kenan, Jr., Professor of Psychology at Furman University. His research examines processes involved in prospective memory retrieval and how these are affected by aging. In 2014, he received the APS Mentor Award. Einstein can be contacted at gil.einstein@furman.edu.