“Personally, I aim never again to submit for publication a report of a study that was not preregistered.” –D. Stephen Lindsay (2015, p. 1827) in an editorial for Psychological Science

In discussions about the pros and cons of preregistration, it is rarely mentioned that the procedure includes substantial personal benefits and that it generally enhances one’s potential for achieving academic success. Below, we list seven selfish reasons to engage in preregistration. An annotated list of online materials and articles that highlight the benefits and practical feasibility of preregistration can be found here.

Moore (2016) suggests: “Preregister anything you want to get credit for having been able to anticipate.” On datacolada.org, Leif Nelson writes: “In a world of transparent reporting, I choose preregistration as a way to selfishly show off that I predicted the outcome of my study.”

You have a theory you wish to test. You design an elegant experiment and collect many observations. With preregistration, you cannot tinker with the analysis in a posthoc fashion — at least not in secret. You have asked a clear question, and that means you are more likely to receive a clear answer: Will your theory be confirmed or disconfirmed?

Without preregistration, it can be unclear what the data mean, especially for low-power designs and complex measurement methods. This ambiguity encourages fishing expeditions, and such expeditions can take months to complete. Who does not know the hapless grad student who has turned the data inside out, applying a host of alternative analysis options (kindly suggested by various faculty members at the weekly lab meeting) all with the purpose of producing “the goods” (a publishable result)? Because such results are obtained by cherry-picking, the entire enterprise is as useful as digging a hole and filling it back up.

6. Preregistration allows you to have manuscripts accepted “in principle“ regardless of how the results pan out.

Without preregistration, when your empirical result is not to the reviewers’ liking, they will always be able to find a “crucial” flaw in your experiment — a hidden moderator, an inadequate manipulation check, an unrepresentative population, a subtly different instruction, a lack of power, and so on and so forth. Nosek and Lakens (2014, p. 138) termed this “critiquing after the results are known” (CARKing), and they point out that “[m]otivated reasoning makes it easy to generate stories for why results differed from expectations.” Preregistration can protect you from CARKing, but only if the reviewers have signed off on the preregistration proposal — a procedure that is an integral component of the RR format explained above.

Additional arguments in favor of preregistration can be brought to bear. Spirited discussions with senior people in the field, however, suggest to us that experience trumps logic.1 Therefore, we end by calling on psychological scientists to give preregistration a try — you may discover that there is little to lose and much to gain.2 

1    This is reminiscent of the seaweed salad that we once enjoyed at a Japanese restaurant in the outskirts of Detroit. Yes, that salad may have looked like green worms drowned in snot, but the taste was marvellous.

2    Supplemental materials are available on the Open Science Framework. 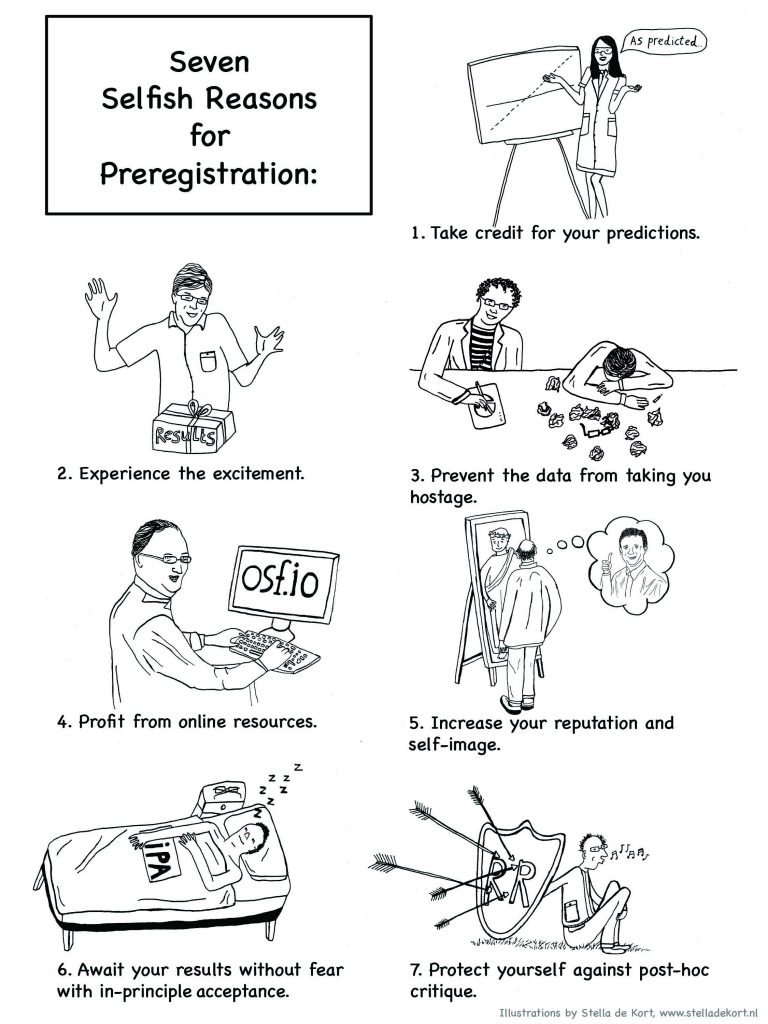