Brenda Milner, a pioneer of memory and language science, sat down with Carol A. Tavris at the 24th APS Annual Convention in the “Inside the Psychologist’s Studio” session.

This extraordinary 93-year old was described by Tavris as “one of our greatest psychological scientists.”

“Her life work has greatly expanded our understanding of the brain and particularly important areas of memory and language,” said Tavris. 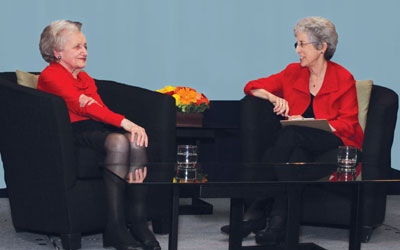 Milner recounted how in 1959 she presented a paper with her mentor Wilder Penfield at the American Neurological Association in Chicago. Afterward, William Beecher Scoville contacted them to introduce a man named H.M. whose temporal lobe Scoville had removed in order to control his severe epilepsy but who had been left with anterograde amnesia.

The work Milner did with H.M. led to a deep understanding of the brain areas involved in memory functioning, Tavris said.

Milner’s more recent work focuses on neural processing of second language learning. She learned German at an early age, tutored by her musician father who undertook her early education.

“I’m so grateful to my parents that I was exposed to foreign languages very early,” she said. “It’s very good for the brain, as has been shown — with maybe only a tiny loss of vocabulary in your own language. It’s also tremendously rewarding socially.”

Milner attributed her excellent memory to good luck in her genes but also to the education she received. “I was taught to do what I want to do and to not be deterred. And I was really resolute.”

She had a final thought to impart to the students in the audience.

“Let me say, if you’re in the wrong career, don’t hesitate to change. I could be a mediocre math teacher in high school today.”