Think back on a time when you uttered that word—or at least felt that feeling. It shouldn’t be hard, because it’s a very common experience. You’re probably recalling a time when you narrowly escaped some misfortune or unpleasantness—an injury or illness or public humiliation. You dodged the proverbial bullet, and that palpable, positive feeling that comes afterward is called relief.

Relief may be the most common yet unexamined emotion in the human repertoire. Despite its familiarity, we don’t really know much about its nature or purpose. How does relief function in the human mind? What benefit could this pervasive emotion have in navigating life?

Two psychological scientists recently set out to deconstruct this sensation called relief. Kate Sweeny of the University of California, Riverside, and Kathleen Vohs on the University of Minnesota started off by simply asking a large group of people to recall personal examples of relief. Many did indeed describe dodge-the-bullet experiences, the kind that might elicit a Whew! Many—but not all. In fact, nearly half recalled something quite different, the relief that comes with a job well done—or at least done. They recalled facing an arduous task, and putting their heads down and completing it—and the relief that comes with such closure. So not so much a Whew! moment as a Finally! moment.

Are there really Whew! moments and Finally! moments—very different circumstances that generate the same basic emotion? Sweeny and Vohs decided to explore this possibility in a couple experiments. They wanted to see if, on closer examination, the two kinds of relief might differ significantly in nature and consequences.

They first recruited a large group of adult volunteers, from 18 to 70 years of age, and had them recall and describe either a Whew! or a Finally! experience. They also reported on any “what if” thinking that may have accompanied their experience of relief: That is, thoughts of how things might have turned out differently, either better or worse. Finally, they all reported on their feelings of social connectedness or isolation following the experience.

The scientists suspected that the two kinds of relief would produce different results, cognitively and emotionally. And that’s just what they found. Those who were recalling a Whew! experience were much more likely to fixate on the most dire outcome they might have experienced. Those recalling a Finally! experience also engaged in what-if thinking, but they tended to focus on how things might have turned out better. Sweeny and Vohs believe this is because “what if” thinking arises to guide future behavior: When we narrowly dodge a bullet, it’s adaptive to think about how we might do that again (or even better) next time around. Such strategizing is not so beneficial when one has completed a task that’s either unavoidable or, in the end, gratifying—even if it is a relief to do so.

Those who were reliving a Whew! moment also said that they felt more socially isolated than did those reliving a Finally! moment. That, the scientists speculate, is because focusing on a narrowly avoided misfortune leads to ruminating about how close we came to catastrophe, and such self-centered rumination disrupts our sense of connection to others.

At least that’s the theory—that the chain of psychological events goes from Whew! experience to dire thinking to feelings of being isolated and alone. The scientists wanted to verify this, and they wanted to do it without relying on the volunteers’ memories. So in a second experiment, they actually elicited the two kinds of relief using a truly threatening real-life experience: singing solo in public. One by one, volunteers arrived at the lab, ostensibly to take part in a study of music and emotion. They were all told that they would be required to sing the syrupy song “Feelings”—for the experimenter, who would also record the performance. About half the volunteers actually did this, but the others were spared at the last second. They were told that the recorder was malfunctioning, and that they would not be performing after all. So in other words, some had a Finally! experience, others a Whew! experience. 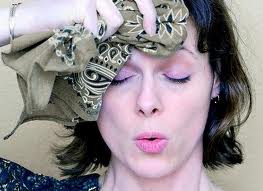 Then, as in the earlier experiment, the volunteers described their what-if thinking and feelings of connectedness or isolation. The results, reported on-line in the journal Psychological Science, were consistent with the earlier findings. That is, those who were thinking Whew! were more apt to imagine the worst, and this catastrophic thinking led to feelings of being alone and disconnected. Their minds may have been strategizing for the future, but in the meantime they were suffering through painful what-if scenarios.

The other form of relief—Finally!—may also have some adaptive value for the future, though quite different. By engendering positive thinking and solidifying a sense of belonging, it might help reinforce the motivation to push on when faced with life’s challenges. That’s a relief to know.

Wray Herbert’s book, On Second Thought, is about irrational thinking and decision making. Excerpts from his two blogs—“We’re Only Human” and “Full Frontal Psychology”—appear regularly in The Huffington Post and in Scientific American Mind.

1) Induced relief: is it just me, or do other people subject their loved ones to continued set ups designed to elicit ‘dodge a bullet’ whew type responses? For example, shutting the front door and saying ‘you’ve got the keys, haven’t you?’, when you know full well you’ve got the keys? Am I causing rumination and social isolation, not to mention constant annoyance? Does everyone do this? Why does it never stop being funny (for me)?

2) The relief on waking from a bad dream and finding ‘it was just a dream’. Does everyone get this, do people experience it as pleasurable, etc.

Any thoughts and relevant research welcome!

Now, did you bring the tickets?