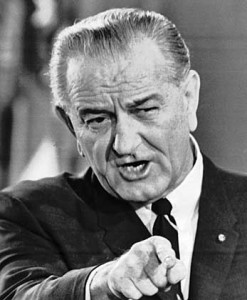 Looking back on all the U.S. presidents, certain ones clearly stand out as larger than life. Andrew Jackson, TR, LBJ—these were flamboyant and domineering men, and also great leaders. Some might quibble about who among these had the biggest personality, but no one would put Calvin Coolidge or Millard Fillmore in their company.

Yet our greatest leaders often have dark sides as well. Old Hickory was a violent man, a duelist and killer. The macho TR, the youngest and most popular president sworn into office, was ultimately rejected by the nation. LBJ waged the most unpopular war in American history, withdrawing from public life in the face of certain defeat.

Historians and biographers have commented on the curious co-existence of excellence and malignance in individual presidents. But does this personality type—this mix of brightness and darkness—actually predict presidential greatness? A team of psychological scientists has been exploring this idea. Emory University professor Scott Lilienfeld and graduate student  Ashley Watts hypothesized that a personality type called “grandiose narcissism” might explain both the positive and negative aspects of the more enigmatic U.S. presidents.

To test this theory, they gathered data from several sources, both historical and psychological. They got their estimates of presidential narcissism from a previous investigation of presidential leadership. Experts—presidential biographers and other scholars—rated the personalities and behavior, including unethical behavior, of the 42 presidents up to and including George W. Bush—the most recent complete presidency at the time of the study.

In addition, the scientists included independent historical surveys of presidential performance, including public persuasiveness, crisis management, Congressional relations, economic management, and so forth. They also gathered other objective indicators of presidential success—measures like years served, years as a wartime president, legislative successes, scandals in office, impeachments, and assassinations.

When they crunched all the data together, this is what they found:

Grandiose narcissism—but not the more vulnerable kind of narcissism—was linked to overall greatness in presidential performance. More specifically, this flamboyant personality type was associated with persuasiveness, adept crisis management, agenda setting and legislative initiative. However—and it’s a big however—grandiose narcissists were also more likely to be involved in unethical and criminal acts. In short, this personality type is a double-edged sword for American presidents.

A more detailed analysis, plus the complete narcissistic rankings of U.S. presidents, is included in an article to be published in the journal Psychological Science. In general, the scientists found that presidents are much more likely than the rest of us to be grandiose narcissists. And what’s more, it appears that grandiose narcissism is on the rise among our presidents. The reasons for this change are unclear. It could be the result of increasing demands on presidents to be more publicly charismatic, which might be a consequence of increased media coverage. Or it could reflect a broader increase in narcissism in the country itself, which means that our presidents truly represent the people who put them into office.

Wray Herbert’s blogs—“We’re Only Human” and “Full Frontal Psychology”—appear regularly in The Huffington Post and elsewhere.

News > We're Only Human > Hail to the Narcissist: POTUS and Personality