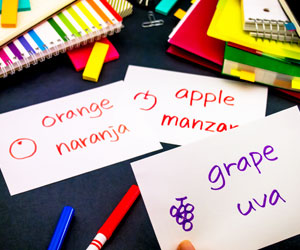 “Our findings show that if bilinguals switch languages at the right times, they can do it without paying any cost,” says study author Daniel Kleinman of the University of Illinois at Urbana-Champaign. “This goes against both popular belief and scientific wisdom that juggling two tasks should impair performance. But our results suggest that multi-tasking may be easier than it seems as long as people switch at the right times.”

Kleinman and co-author Tamar Gollan of the University of California, San Diego speculated that people may show different outcomes in the lab than they do in everyday conversations because lab studies typically require bilingual speakers to switch languages on command and at times when those switches are likely to be inefficient. If bilingual speakers were allowed to choose a language for a particular object or concept and then stick with it, the researchers hypothesized, they might be able to switch between languages without slowing down.

In other words, consistently using English to say “dog” and Spanish to say “casa” over the course of a conversation that toggles between the two languages could eliminate the costs that typically come with language-switching.

Across two studies, a total of 171 bilingual university students completed a picture-naming task. The participants, who spoke English and Spanish fluently, were presented with a series of black-and-white drawings of objects organized in four separate blocks.

The results showed that consistency is key: Participants didn’t slow down when switching languages between pictures as long as they consistently used the same language each time a particular picture appeared.

Switching languages between pictures noticeably slowed their response times, however, when they followed cues telling them which language to use to name each picture, or if they did not follow the instruction to be consistent about which language they used for each picture.

But additional findings suggest that bilingual speakers don’t necessarily use consistency as a strategy on their own. When participants were free to choose which language to use, language-switching led to slower response times because most speakers didn’t consistently associate each picture with a particular language.

These findings show that even experienced language-switchers have room for improvement.

“Although bilinguals have been switching between languages for their entire lives, the strategies they use to decide when to switch may vary depending on context,” Kleinman explains. “While speakers may sometimes adopt switching strategies that incur costs, these studies show that all bilinguals can be redirected quickly and easily to switch for free.”