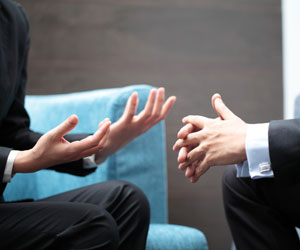 People the world over gesture when they talk, and they tend to gesture in certain ways depending on the language they speak. Findings from a new study including blind and sighted participants suggest that these gestural variations do not emerge from watching other speakers make the gestures, but from learning the language itself.

“Adult speakers who are blind from birth also gesture when they talk, and these gestures resemble the gestures of sighted adults speaking the same language. This is quite interesting, since blind speakers cannot be learning these language-specific gestures by watching other speakers gesture,” explains psychological scientist and lead researcher Şeyda Özçalışkan of Georgia State University.

While research had shown that speakers of different languages used gestures in different ways, the origin of these differences was not clear. Özçalışkan and colleagues Ché Lucero and Susan Goldin-Meadow of the University of Chicago realized that they might be able to answer the question by comparing the gestures produced by sighted and congenitally blind individuals who speak the same language.

The researchers decided to focus specifically on gestures related to motion across space, which tend to show considerable variation across languages. English speakers, for example, typically combine both the manner of motion (e.g., running) and the path of motion (e.g., entering) into a single gesture. Turkish speakers, on the other hand, produce separate gestures to indicate manner and path.

Participants explored the scene, using their hands to touch and feel the components; they were told that although the figurine appeared three times in the scene, they should think of her movement as representing a single continuous motion. The participants were then asked to describe the scene.

“We now know that blind speakers do not all gesture in the same generic way,” Goldin-Meadow explains. “Rather, their gestures resemble those of other speakers of the same language.”

While the study focused on speech and gesture in English and Turkish, the researchers note that these two languages represent a broader pattern in the world’s languages. When it comes to expressing motion in space, Dutch, Swedish, Russian, Icelandic, and Serbo-Croatian are similar to English, while French, Spanish, Hebrew, Japanese cluster with Turkish.

“Together, our findings show that gestures that are produced with speech carry the imprint of the language that they accompany even in the absence of access to native gesture patterns, marking speech as the source of cross-linguistic variation in gesture,” Özçalışkan and Goldin-Meadow conclude.

This work was supported by Grant 12-FY08-160 from the March of Dimes Foundation to S. Özçalıskan and S. Goldin-Meadow.