“Our findings suggest that impressions from still photos of individuals could be deeply misleading,” says psychological scientist and study author Alexander Todorov of Princeton University. 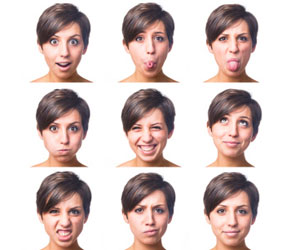 Previous research has shown that people form first impressions about someone’s personality after viewing their face only briefly. But much of this research has rested on the assumption that an image offers a single, true representation of what a person is like.

The results of a series of studies conducted by Todorov and colleague Jenny Porter, of Columbia University, suggest that there really isn’t a static link between face and personality:

“This research has important ramifications for how we think about these impressions and how we test whether they are accurate,” says Todorov.

And it may also have direct consequences for everyday life:

“The findings suggest that the images we post online can affect us in unexpected, and undesired, ways, subtly biasing other people’s decisions.”

For their first study, Todorov and Porter asked participants in an online survey to view and rate target faces on various characteristics, including attractiveness, competence, creativity, cunning, extraversion, meanness, trustworthiness, or intelligence.

The images were all straight-on headshots, taken in similar lighting. There were, however, slight differences across photos of the same individual, reflecting natural variation in facial expression.

In other words, different images of the same individual led to noticeably varied first impressions.

Importantly, preferences for specific images emerged even when the photos were displayed for just a fraction of a second.

“What we have shown here is something that people in the business of image manipulation have known for a long time,” Todorov and Porter write. “Yet most psychology research treats face images as veridical representations of individuals.”

While people may show consistency in the judgments they make based on specific photos of an individual, the researchers argue that it’s unlikely that a single snapshot could accurately reflect the full range of that individual’s personality:

“The face is not a still image frozen in time but rather a constantly shifting stream of expressions that convey different mental states,” they note.

Todorov and Porter plan on continuing this line of research, investigating whether images that are even less constrained in their features — using, for example, different lighting, face orientation, and head tilt — lead to even greater divergence in viewers’ first impressions.

All data and materials can be accessed at http://tlab.princeton.edu/publications/todorovandporterdataandstimuli/. The materials are also available in the Supplemental Material. The complete Open Practices Disclosure for this article can be found at http://pss.sagepub.com/content/by/supplemental-data.