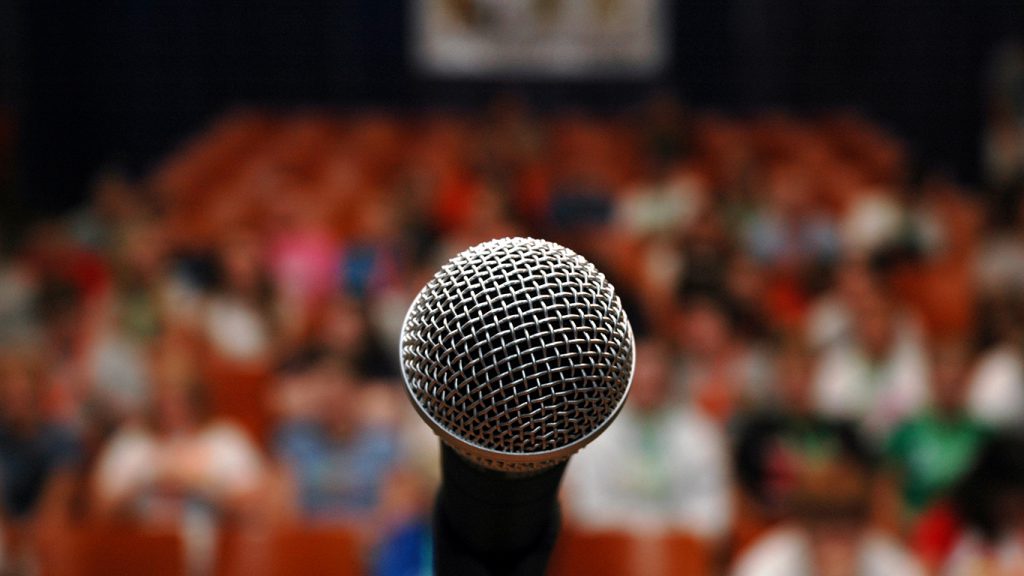 Fear of public speaking tops death and spiders as the nation’s number one phobia. But new research shows that learning to rethink the way we view our shaky hands, pounding heart, and sweaty palms can help people perform better both mentally and physically.

Before a stressful speaking task, simply encouraging people to reframe the meaning of these signs of stress as natural and helpful was a surprisingly effective way of handling stage fright, according to new research published in Clinical Psychological Science, a journal of the Association for Psychological Science.

“The problem is that we think all stress is bad,” explains Jeremy Jamieson, the lead author on the study and an assistant professor of psychology at the University of Rochester. “We see headlines about ‘Killer Stress’ and talk about being ‘stressed out.’” Before speaking in public, people often interpret stress sensations, like butterflies in the stomach, as a warning that something bad is about to happen, he says.

“But those feelings just mean that our body is preparing to address a demanding situation,” explains Jamieson. “The body is marshaling resources, pumping more blood to our major muscle groups and delivering more oxygen to our brains.” Our body’s reaction to social stress is the same flight or fight response we produce when confronting physical danger. These physiological responses help us perform, whether we’re facing a bear in the forest or a critical audience.

For many people, especially those suffering from social anxiety disorder, the natural uneasiness experienced before giving a speech can quickly tip over into panic. “If we think we can’t cope with stress, we will experience threat. When threatened, the body enacts changes to concentrate blood in the core and restricts flow to the arms, legs, and brain,” he explains. So, “cold feet” is a real physiological response to threat, not just a colorful expression.

“Lots of current advice for anxious people focuses on learning to ‘relax,’– you know, deep, even breathing and similar tips,” says Jamieson. Such calming techniques, write the authors, may be helpful in situations that do not require peak performance. But when gearing up for a high-stakes exam, a job interview, or, yes, a speaking engagement, reframing how we think about stress may be a better strategy.

Then how can people reap the benefits of being stressed without being overwhelmed by dread? To answer that question, Jamieson and co-authors Matthew Nock of Harvard University, and Wendy Berry Mendes of the University of California in San Francisco, turned to the Trier Social Stress Test. Developed in 1993 by Clemens Kirschbaum and colleagues, this experiment relies on fear of public speaking and has become one of the most reliable laboratory methods for eliciting threat responses.

In the study, 69 adults were asked to give a five-minute talk about their strengths and weaknesses with only three minutes to prepare. Roughly half of the participants had a history of social anxiety and all participants were randomly assigned to two groups. The first group was presented information about the advantages of the body’s stress response and encouraged to “reinterpret your bodily signals during the upcoming public speaking task as beneficial.” That group also was asked to read summaries of three psychology studies that showed the benefits of stress. The second group received no information about reframing stress.

Participants delivered their speech to two judges. On purpose, the judges provided negative nonverbal feedback throughout the entire five-minute presentations, shaking their heads in disapproval, tapping on their clipboards, and staring stone-faced ahead. If study subjects ran out of things to say, the judges insisted that they continue speaking for the full five minutes. Following the speech, participants were asked to count backwards for five minutes in steps of seven beginning with the number 996. The evaluators again provided negative feedback throughout and insisted that participants start over if they made any mistakes.

Confronted with scowling judges, participants who received no stress preparation experienced a threat response, as captured by cardiovascular measures. But the group that was prepped about the benefits of stress weathered the trial better. That group reported feeling that they had more resources to cope with the public speaking task and, perhaps more tellingly, their physiological responses confirmed those perceptions. The prepped group pumped more blood through the body per minute compared to the group that did not receive instruction.

Surprisingly, this study also found that individuals who suffer from social anxiety disorder actually experienced no greater increase in physiological arousal while under scrutiny than their non-anxious counterparts, despite reporting more intense feelings of apprehension. This disconnect, argue the authors, supports the theory that our experience of acute or short-term stress is shaped by how we interpret physical cues. “We construct our own emotions,” says Jamieson.

Jamieson shares his new research in this short video from the University of Rochester.