People make dramatically different decisions about who should receive hypothetical transplant organs depending on whether the potential recipients are presented as individuals or as part of a larger group, according to new research published in Psychological Science, a journal of the Association for Psychological Science. The findings show that when recipients are considered in groups, people tend to allocate organs equally across the groups, ignoring information about the patients’ chances of success. 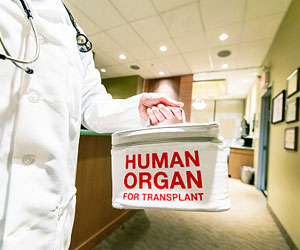 “This is important because public policies about prioritizing resources are framed at the group level — for example, younger recipients are prioritized for the best transplant organs — and yet actual allocation decisions are often made at the individual level,” explains psychological scientist and senior study author Gretchen Chapman of Rutgers University.

Headshot-style photos of the patients were presented in a grid that had a vertical line running down the middle, with 6 patients on either side of the line. Some participants saw “Chance of Success: High” written over top of the right side and “Chance of Success: Low” over the left. For other participants, the same information about chance of success was written instead under each individual patient photo. Also, some participants made a decision about how many kidneys to allocate per group, while others had to decide whether to allocate a kidney to each individual patient.

In two additional online studies, some participants saw a unified group of 12 patients, while others saw two groups of six patients divided by a line (as in the first study). Again, presenting patients as part of groups had a noticeable impact on participants’ allocation decisions:

“It’s surprising how such a subtle manipulation shifted participants’ responses,” says Chapman. “Just drawing a line down the middle of the screen to separate the 12 recipients into two groups of six and putting a label over each group was enough to make participants less efficient in their allocation.”

The findings showed a robust grouping effect, regardless of the types of labels used to identify the groups and the amount of information provided about the potential recipients.

Together, these findings suggest that people have a strong bias toward equality when it comes to divvying up limited resources, even if equality doesn’t ultimately lead to the most logical or effective decisions. There are some contexts, however, in which the grouping effect could be helpful:

“If managers making decisions about hiring or promoting employees were to have candidates grouped by gender instead of presented as individuals, they might be prompted to spread jobs across the groups more evenly, which would lead to the hiring or promotion of more women,” explains Chapman.

The researchers plan on exploring the potential positive outcomes of grouping in future studies.

All data and materials have been made publicly available via Open Science Framework and can be accessed at https://osf.io/wk3ve/. Study 3 was preregistered at https://osf.io/k29e6/. The complete Open Practices Disclosure for this article can be found at http://pss.sagepub.com/content/by/supplementaldata. This article has received badges for Open Data, Open Materials, and Preregistration. More information about the Open Practices badges can be found at https://osf.io/tvyxz/wiki/1.%20View%20the%20Badges/  and http://pss.sagepub.com/content/25/1/3.full.