Practice may not make perfect, but visualization might. New research shows that people who imagined a visual target before having to pick it out of a group of distracting items were faster at finding the target than those who did an actual practice run beforehand. The findings are published in Psychological Science, a journal of the Association for Psychological Science.

“The idea that we can train our brains to work better is all the rage across society, but our research suggests that the human brain may benefit as much, or even more, from imagining performing a task, than the brain does from practicing a task over and over,” says psychological scientist and study author Geoffrey Woodman of Vanderbilt University. 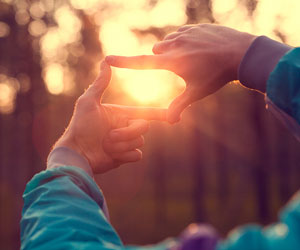 “Until now, people have thought that imagining performing a task improved how efficiently people could decide how to respond to objects, or how well those motor responses were executed. To our knowledge, this study is the first demonstration that imagery actually changes how information is processed early on in the visual system,” Woodman explains.

Imagery, or visualization, is commonly used as a technique to improve performance in various sports. When Woodman heard an interview with legendary tennis player Billie Jean King — in which she attributed her success in tournaments to imagining what the ball would look like coming at her under different conditions — he began to wonder whether visualization might actually improve visual processing and not just motor performance.

The research team, including Vanderbilt researchers Robert M.G. Reinhart and Laura J. McClenahan, brought participants to the lab and had them look at a computer screen while their brain activity was recorded via EEG. The participants looked at a series of images, each of which contained a bunch of letter Cs arranged in a ring; importantly, the Cs varied in how they were oriented (i.e., which way the gap in the C pointed). The participants were asked to determine, as quickly and accurately as they could, whether a target — a red or green C with a particular orientation — was present or absent in each image.

“We ended up running a fairly large number of experiments because it was so surprising that imagery beat actual practice,” says Woodman.

The results of these experiments indicated that imagination is superior to practice because it doesn’t involve as much visual interference. When participants practice a search, the distracting stimuli (all the non-target Cs) appear to leave traces in memory that interfere with performance on the next visual search. When participants imagine the search, on the other hand, the non-target stimuli receive much less focus, and are therefore less likely to interfere with later performance.

The increased efficiency brought on by imagination was also supported by the EEG data, which showed a link between imagination and a pattern of brain activity thought to be specialized for shifting visual attention.

“We found that imagining searching for targets changed how strongly the visual system responded to the targets within 200 ms of an array of objects appearing,” says Woodman.

The researchers point out that these findings have broad implications across a variety of fields:

“This study indicates that some of the success of imagery for learning in sports, music, and clinical settings is due to how well our sensory systems process inputs. So using imagery can change information processing in the brain at the earliest levels,” Woodman concludes.

All materials have been made publicly available via Open Science Framework and can be accessed at https://osf.io/9pe2x/. The complete Open Practices Disclosure for this article can be found at http://pss.sagepub.com/content/by/supplemental-data. This article has received the badge for Open Materials. More information about the Open Practices badges can be found at https://osf.io/tvyxz/wiki/1.%20View%20the%20Badges/ and http://pss.sagepub.com/content/25/1/3.full.