Given that depression is characterized by intense and frequent negative feelings, like sadness, it might seem logical to develop interventions that target those negative feelings. But new research suggests that even when depressed people have the opportunity to decrease their sadness, they don’t necessarily try to do so. The findings are published in Psychological Science, a journal of the Association for Psychological Science.

“Our findings show that, contrary to what we might expect, depressed people sometimes choose to behave in a manner that increases rather than decreases their sadness,” says the study’s first author Yael Millgram of The Hebrew University. “This is important because it suggests that depressed individuals may sometimes be unsuccessful in decreasing their sadness in daily life because, in some sense, they hold on to it.” 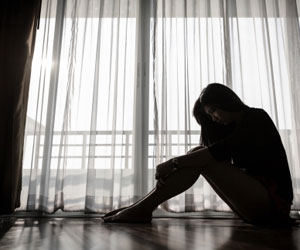 Millgram and colleagues couldn’t find any research that had examined the direction in which depressed people try to regulate their emotions, perhaps because it seems logical to assume that they would try to decrease their sadness if they could. The researchers set out to conduct their own series of studies to find out whether this was actually the case.

In the first study, 61 female participants were given a well-established screening measure for symptoms of depression. Participants who scored on the very low end of symptoms were classified as “nondepressed” for the study, while those who scored in the middle to high end of the range and who were also diagnosed with a major depression episode or dysthymia were classified as “depressed.”

All of the participants were then asked to complete an image selection task — on each trial, the participants saw a particular image and could press one key to see it again or a different key to see a black screen for the same amount of time. The images were presented in random order and were drawn from a group of 10 happy images, 10 sad images, and 10 emotionally neutral images.

Comparing across the three types of images, the data showed that both depressed and nondepressed participants chose to see happy photos again more often than they chose to re-view the sad or neutral photos.

But, when the researchers looked specifically at how the groups responded to the sad images, they found that participants who were depressed chose to view those images again more often than the nondepressed participants did.

The findings suggest that developing effective tools isn’t enough to help people regulate their emotions in beneficial ways — they also have to be motivated to use those tools.

“The most urgent task for us is to try to understand why depressed people regulate their emotions in a manner that increases rather than decreases sadness,” says Millgram.

The researchers also plan on investigating the real-world implications of choosing to increase sadness as people respond to stressful events in their daily life.

Co-authors on the study include Jutta Joormann of Yale University and Jonathan D. Huppert and Maya Tamir of The Hebrew University.