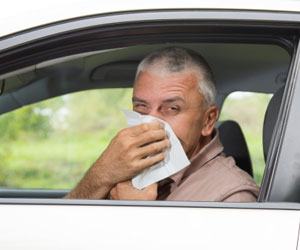 Fatigue is quickly becoming recognized as one of the most dangerous driving impairments. But that drowsiness is not just the product of sleep deprivation or over-exertion. Sluggishness resulting from the common cold can also hamper driving abilities.

The researchers conducted a two part, divided-attention test on 25 English college students. These volunteers were split into either a “Healthy” or “Colds” sample based on the self-assessed severity of their cold symptoms.

The first test measured how often participants would miscalculate collisions of geometric shapes coming from random directions and speeds on a screen. The students were also instructed to press a foot pedal if those geometric shapes matched those on the border of the screen.

The second test used a driving simulation that measured how frequently the volunteers incorrectly timed a turn, causing them to collide with a series of common obstacles, such as pedestrians and making turns through oncoming traffic. Speeding and traffic light violations were also calculated.

Smith and Jamson found that those students with a cold performed more poorly than their healthier counterparts in many of the measurements.

Particularly, participants with a cold were significantly more likely to react slower to target stimuli, collide into pedestrians, and keep unsafe distances when following other cars.

The results, published in BMJ Open Journal, suggest that driving with the sniffles may be hazardous to your safety, and the safety of others.

Evidence suggests that exposure to television in toddlerhood may not cause attention-deficit problems after all. More