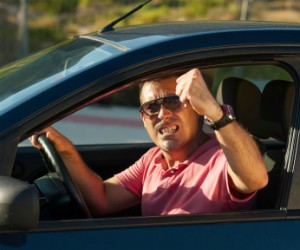 People’s inability to contain their explosive anger behind the wheel has led to stabbings, beatings, shootings, and fatal crashes. The AAA Foundation for Traffic Safety reported that, “at least 1,500 people a year are seriously injured or killed in senseless traffic disputes.”

In some cases, road rage is essentially the result of cognitive distortions, and there are promising evidence-based interventions that teach aggressive drivers to recognize that dysfunctional thinking, as researchers Christine Wickens, Robert Mann, and David Wiesenthal pointed out in Current Directions in Psychological Science.

One new intervention against road rage comes from a team of psychological scientists led by Yori Gidron of the Free University of Brussels. Gidron and his colleagues attempted to “psychologically inoculate” drivers from the cognitive distortions that lead to aggressive driving.

Psychological inoculation, a technique that has been researched in many domains of public health, aims to help people resist the distorted reasoning that influences their behavior. For example, a driver prone to road rage might misattribute other drivers’ motivations; instead of assuming that getting cut off was just an accident, an anger-prone driver might assume that the other guy did it on purpose and needs to be taught a lesson.

In one experiment, 40 male college students used a driving simulator in the lab. All of the students went for an initial drive on a road through a simulated urban area.

Participants then received one of the two anti-aggressive driving treatments. After reading a paragraph about the dangers of aggressive driving, volunteers in the inoculation condition were asked to challenge a series of statements about driving aggressively.

For example, they might have to come up with a rebuke to a statement saying: “You always need to seek revenge against someone who cut you off.” Essentially, participants used their own words to inoculate themselves against the cognitive distortions that commonly lead to anger behind the wheel. Controls read the same educational materials and then took part in a conversation about why road hostility is dangerous.

After the interventions, all of the participants took another drive in the simulator. Four driver behaviors were recorded and analyzed for each volunteer: number of accidents (crashing into objects, people, walls or other cars), driving onto the sidewalk, violating the speed limit, and dangerous over-taking.

“Our research shows the importance of adding psychological elements to driving education/awareness interventions,” writes Gidron and colleagues. “It is clear that increasing awareness for the importance of safe driving or teaching only correct driving skills, while essential, may not alter or prevent the actual tendency to take risks during driving or to resist social pressures to take risks while driving or may not reduce road hostility.”

However, the researchers caution that, though promising, more research looking at the effectiveness of psychological inoculation needs to be completed. For example, future research should not only attempt to replicate these findings, but should investigate whether the effects last over time.