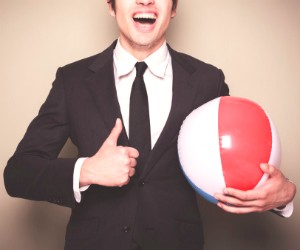 Workers in Google’s offices enjoy an impressive array of perks: subsidized massages, scooters, putting greens, and office video game consoles. In an interview with The New York Times, a Google spokesman explained that the company provides these unusual perks as a way “to create the happiest, most productive workplace in the world.”

But new research suggests that when it climbs too high, a positive mood in the office can actually hurt employee motivation.

Happy employees are more likely to engage in the kind of proactive above-and-beyond behaviors that organizations need to succeed. But a recent study from psychological scientists Chak Fu Lam (Suffolk University), Gretchen Spreitzer (University of Michigan), and Charlotte Fritz (Portland State University) found that when positive mood climbs beyond a certain point, positive behavior at work may actually start to decline.

We might assume that unhappy employees are the ones most likely to feel unmotivated and complacent, but the researchers hypothesized that these feelings might also emerge among particularly happy employees. That is, very upbeat workers could interpret their positive feelings as a sign that everything is going swimmingly at work and that there’s no need for them to try to strive for improvements.

“Positive affect can reach a level such that employees perceive that they are doing well and it is not necessary for them to take initiatives, thereby reducing their proactive behaviors,” Lam and colleagues write in the Journal of Organizational Behavior.

For their study, Lam and colleagues asked 236 workers at a software development firm to rate statements like “I feel alive and vital at work” and “I have energy and spirit at work” as part of a measure for positive affect.

Their supervisors then rated how much each employee engaged in proactive behaviors around the office, including providing encouragement to their colleagues and speaking up about potential issues.

The results revealed that proactive behaviors at work increased with positive affect, but only up to a point. The most engaged employees were the ones who reported a moderately positive mood, while the most positive and least positive employees reported the fewest helpful behaviors.

In a second study, the researchers had 196 staff members from a support services company complete the same survey on positive affect at work. In addition, they also completed measures for their general positive and negative affect.

One month later, 128 supervisors rated each participant for a series of eight proactive behaviors related to addressing customer needs and anticipating potential problems (i.e., he/she tried to fix problems before customers even noticed).

Again, the researchers found that the most proactive employees were those who rated their mood as moderately positive; the least happy and most happy workers both undertook significantly fewer helpful behaviors.

“We find that rather than a simple linear relationship, the relationship seems to be curvilinear such that too much and too little positive affect at work results in lower levels of proactive behaviors,” write Lam and colleagues. “Thus, we offer evidence that challenges the ‘more is better’ assumption commonly associated with positive affect in the workplace.”

The researchers caution, however, that the study sample may have been subject to selection bias, as less proactive people may be less inclined to take part in the study to begin with. Additional studies using different participant recruitment strategies will be needed to confirm these findings.

Despite the apparent downsides of having employees who show particularly positive mood, the researchers emphasize that there is clear value in ensuring that employees are happy on the job. Managers should take steps to establish proper work-life balance, educational opportunities, and room to grow on the job for all employees.

Interesting perspective. Keep in mind the research was 100% self-report, which is often inaccurate because people are notoriously bad at assessing motives, not to mention the self-selection you referenced. What the researchers did not do is measure self-efficacy, which can be much more objectively grounded. As you indicated over-stimulation can be a distraction. This may be more of cognitive issue than a motivation issue. Have you ever tried to focus on work when you were really excited or happy? Probably not the best approach. Anyway if you want some content for a future post let me know. Check me out at http://www.findingmo.com