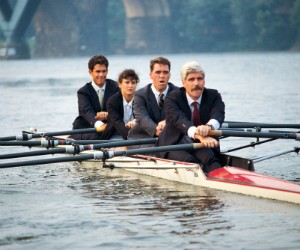 When people work together well, their physiological responses begin to sync up, according to new research from a team of psychological scientists from Aarhus University. The research showed that team members who had synchronized skin conductance and facial muscle activity tended to perform better together.

“People from the same team have higher synchrony that pairs of people from different teams, and this synchrony is positively associated with a team’s cooperation and positive feeling,” the researchers explain.

Many studies on team dynamics rely on surveys and questionnaires that are filled out after team members complete a task. Physiological measures, like heart rate or skin conductance, allow researchers to study emotional reactions in real time—down to minutes or seconds.

For this study, 153 college students ranging in age from 18 to 58 years old were assigned to groups of three. Teams were asked to assemble as many origami paper sailboats as possible over a series of trials. The team with the most paper sailboats at the end would win a small cash prize.

The origami boats were put together assembly-line style with each team member assigned to a specific folding task for each boat. There was one catch: Participants were not allowed to speak to each other during the experiment.

After receiving instructions on how to build the boats, participants were wired up with electrodes that measured their heart rate, skin conductance, and activation of the facial muscles involved in smiling and frowning. After three rounds of boat building, the teams were surprised with a new routine — they had the option of trying out a new folding technique or they could stick with the original method. After this final block of paper folding, participants were asked to complete a questionnaire gauging how connected they felt to their group and how they felt about the team’s cooperation.

Analysis of the physiological data revealed that teams responded to both positive and negative emotions in tandem.

The teams’ levels of synchrony provided enough information that the researchers could successfully predict what decision teams would make about trying the new folding protocol.

Groups that worked really well together tended to avoid changing their folding routine (why mess with a good thing?), whereas groups that were not very successful were more likely to give the new technique a shot.

Thus, if a group’s smiling behavior was highly synced they probably stuck to the original routine; but if their skin conductance was highly synced, it was a sign that things weren’t going smoothly and they were likely to try something new.

Although this research is promising, synchrony measures are relatively new and the researchers caution that future work is needed to fully understand the interactions between emotions, physiological responses, and group dynamics. For example, it was unclear why measures for frowning and heart rate did not show a significant relationship with group cohesion.

“By applying synchrony measures to physiological measures related to emotion, we have shown that synchrony develops spontaneously in newly formed teams, and is correlated with self-reported measures of team cohesion,” the research team concludes. “Moreover, synchrony is an indicator of new patterns of activity and a potential predictor of teams’ decision to adopt novel and innovative solutions.”