News > Minds at Work > One Thing Everyone Agrees On: CEOs Make Too Much Money 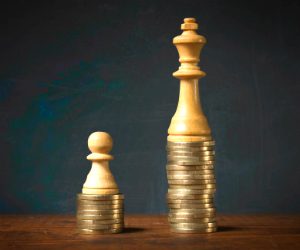 In 2013, the average American worker’s salary was estimated at $35,293. American CEOs, on the other hand, earned a staggering individual average salary of $11.7 million — 331 times that of the average employee. Major discrepancies in pay between CEOs and workers has been a contentious subject not just in the United States, but also across the world.

Just last year in Switzerland, voters considered (and ended up rejecting) a national cap on CEO pay at a ratio of 12-to-1 compared to salaries of the lowest-paid workers.

Although wage disparity has been a hotly debated topic in several countries, little is known about people’s preferences for wage distribution and whether those preferences are universally held by people from different countries and backgrounds.

In order to find out what people really think constitutes fair pay, psychological scientists Sorapop Kiatpongsan of Chulalongkorn University in Bangkok and Michael I. Norton of the Harvard Business School asked 55,238 people across 40 countries how much they thought CEOs and workers should make.

Their findings — from China to New Zealand, people think CEOs get paid too much in comparison to the average Joe.

The study, published in a recent issue of the journal Perspectives on Psychological Science, found that not only did people worldwide grossly underestimate the ratio of CEO to worker pay, but that people across all backgrounds preferred a smaller pay gap.

“Our results, in aggregate and stratified by age, level of education, socioeconomic status, political affiliation, and attitudes toward inequality and pay, suggest that most people desire greater equality in pay,” write Kiatpongsan and Norton.

Kiatpongsan and Norton then calculated a “pay ratio” by dividing the pay of a CEO by that of an unskilled factory worker. Pay ratios were calculated for estimates of both actual income and participants’ ideal incomes.

Across all 40 countries, people thought the pay ratio between a CEO and an unskilled worker was about 10-to-1. In the United States, the actual 2012 pay ratio was 351-to-1, while in Poland and Austria it was under 50-to-1.

Ideal ratios, how much people thought CEOs and workers should make, were surprisingly similar across countries. Taiwan had the highest ratio at about 20-to-1, in the United States it was about 7-to-1, and the most equitable ratio came from Denmark at 2-to-1.

The researchers also found that people preferred a smaller pay gap regardless of their political affiliations. In the survey, respondents reported their political party affiliation and were classified as far left, left, central, right, or far right. They also answered a series of questions assessing their beliefs about inequality.

Even when people disagreed about whether pay gaps were already too large, their ideal ratios were nearly identical at an average of 5-to-1.

“These results suggest that — in contrast to a belief that only the poor and members of left-wing political parties desire greater income equality — people all over the world and from all walks of life would prefer smaller pay gaps between the rich and poor,” Kiatpongsan and Norton write.

News > Minds at Work > One Thing Everyone Agrees On: CEOs Make Too Much Money