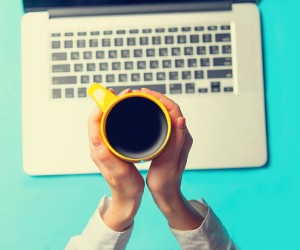 Caffeine is the most commonly used psychoactive drug in the world. And anyone who has ever worked in an office probably has a good reason for this socially accepted drug use: Caffeine enhances many cognitive processes, particularly when people are tired. This could explain why around 90% of Americans consume caffeine every day.

In addition to wreaking havoc on productivity and safety, researchers have found evidence that sleepiness may also play a role in unethical behavior. Sleep deprivation increases the presence of adenosine, an inhibitory neuromodulator that decreases cellular activity in the brain. One known mechanism by which caffeine counteracts the negative effects of sleep deprivation is by blocking adenosine receptors and increasing availability of the nerve cell messenger glutamate.

For the study, about 100 college students were kept awake all night in a lab where they could watch TV and play board games. The next morning, they were joined by a group of 100 well-rested students. At the start of the experiment, all of the students were given two pieces of mint-flavored gum. Half of the participants were given normal gum, but the other half received gum with 200 mg of caffeine — approximately the same amount of caffeine contained in a 12-ounce coffee.

Participants then took part in a money-sharing game. They were led to believe they were splitting $7 with another person in the study, but in reality they were playing against a computer opponent. In the game, the participant was given information about two options for splitting the money; in option A the participant received $5, while in option B they would receive $2. They could send their partner either an honest message (choose option A and you get $5) or a deceptive one (choose option B and you get $5).

Half the participants were assigned to a social influence condition, in which one of the experimenters encouraged them to send the deceptive message. In the control condition, participants received no encouragement either way.

Overall, sleep-deprived students were far more likely than their well-rested counterparts to send the deceptive message. But caffeine appeared to help tired students stick to their ethical principles. Among sleep-deprived students, those who had consumed caffeine were significantly less likely to send a deceptive message compared to their un-caffeinated counterparts, even under social pressure from the experimenter.

“The effects we found might be even stronger in an organizational context where employees not only have to stay awake all night but must also fulfill challenging job responsibilities during this period,” the researchers write.

Organizations need to be aware that the negative costs of sleep deprivation not only hurt employees, but can also hurt the bottom line. In a recent special section of Perspectives on Psychological Science, researchers argue that policymakers need to start taking steps to prioritize sleep health in the workplace with stronger regulation of work hours and schedules.

While Welsh and colleagues suggest that providing caffeine in the workplace is one way to help avoid ethical lapses, they also warn that caffeine is no substitute for getting a good night’s sleep.