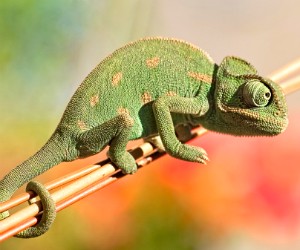 We often unconsciously mirror the behavior of those around us, particularly when we’re trying to make a good impression, a phenomenon known as the “chameleon effect.” Research shows that, in general, mimicking another person’s gestures, inflections, or posture tends to make us come across as more likeable to that person.

But a new study conducted by a team of psychological scientists from Texas Tech University and Drew University finds that people will also unwittingly mimic negative behaviors that can potentially get them into trouble.

“The current study demonstrates that people will mimic negative behaviors during social interactions, even when that mimicry causes negative outcomes,” Smith-Genthôs and colleagues write in the Journal of Experimental Social Psychology. “At the very least, it is now clear that there is a darker side to behavioral mimicry.”

For the study, 54 female college students were told they could win $50 if they were chosen as the best candidate during a simulated job interview for a student manager position at a campus travel agency.

When asked to rate their interview experience during a debriefing, applicants in the negative-tone condition did not differ from those in the neutral-tone condition in ratings for how comfortable, nervous, or self-conscious they felt during the interview.

Two teams of coders then evaluated the applicants’ interview performance based on either an audio recording or a transcript of the interview. The applicants were rated on a 9-point scale for factors such as interpersonal skills, expected performance, and likelihood of hiring.

Audio recordings of the interviews were also subjected to a low-pass filter that removed recognizable words while retaining tone of voice, and a third team of coders assessed applicant tone for qualities like warmth, enthusiasm, interest, and affect.

Smith-Genthôs and colleagues found that applicants’ tone of voice changed to match their interviewer’s, even when the interviewer was using a negative tone. Applicants who had a negative-toned interviewer ended up unconsciously responding to questions in a more negative tone themselves, which led to lower scores for their interview performance compared to the neutral-toned control group.

To date, most research examining mimicry behavior has focused on positive behaviors and outcomes, but these findings suggest that the circumstances and potential consequences of negative mimicry constitute a ripe area for future research. It’s possible, for example, that negative mimicry processes contribute to the escalation of conflict in social situations and arguments.