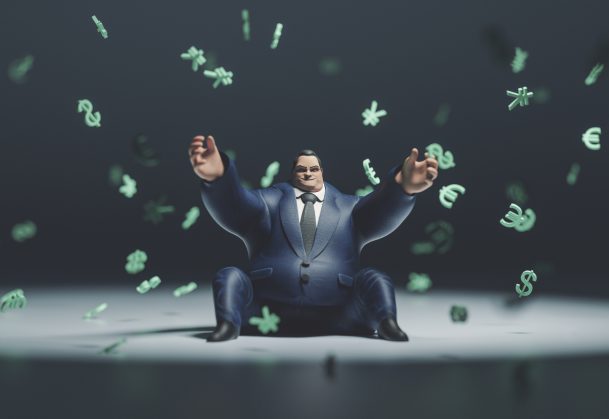 The global financial crisis now known as the Great Recession resulted from a culture of risky lending practices, speculative mania, and lax regulations. Investigations into the cause of the meltdown revealed a shaky state of ethics on Wall Street,—and in society in general. Research suggests that the free market principles that serve as the cornerstone of many western economies may serve as a sturdy foundation for fraud and deception.

Citing earlier studies showing that students’ penchant for cheating leads to professional dishonesty, psychological researchers Caroline Pulfrey and Fabrizio Butera, of the University of Lausanne, Switzerland set out to determine whether cheating has any relation to individual adherence to neoliberal capitalistic values. Their findings will be published in an upcoming issue of Psychological Science, a journal of the Association for Psychological Science.

In a series of studies, Butera and Pulfrey provided questionnaires to students at an international management school to measure their feelings about values such as self-enhancement or getting ahead—the individual-level equivalent of neoliberal capitalistic values—and about self-transcendence or caring for others. In the first experiments, participants were asked to rate their level of agreement with such questions as “It is important to me to be rich” and “It is important to be successful.”  They were also asked to identify values that motivate them to study, and whether their goals in school were to perform better than or just well compared with other students.  Finally, they completed a four-item scale of condoning of cheating, such as copying off of their peers or getting outside help on their coursework.

As the researchers anticipated, the more strongly individual participants adhered to self-enhancement values, the more likely they were to condone cheating.

But Pulfrey and Butera also wanted to determine whether free-market values not only predicted people’s openness to cheating, but also to their actual engagement in dishonest behavior.

So in a separate study, they had students fill out the same values questionnaire, and then read a short extract from an article emphasizing the importance of focusing on problem-solving skills in business schools. The participants were then told they would have 10 minutes to solve six problems requiring the drawing of geometric figures without lifting their pencil off the paper and without retracing any line. They also were informed that a ranked list of their scores would be provided to their teacher, who would post the list in their next class. Three of the problems were in fact unsolvable, even though they looked no more complicated than the solvable puzzles.

Finally, the students were debriefed after the exercises, in which they reported their rates of success on the problem-solving task. The researchers documented a direct link between those people who demonstrated strong self-enhancement values and cheating behavior, i.e. reporting to have solved at least one of the three unsolvable problems.

Pulfrey and Butera say their study is the first to establish this attitudinal and behavioral impact of self-enhancement values.  They attribute that connection to a societal focus on wealth and status, which is strongly emphasized in business and management studies. They point to earlier studies showing that as people place increasing importance on material success, they engage in more unethical behavior by rationalizing that the ends justify the means.

But their research also highlights some hope for ethics in business and academia. In yet another study, students were instructed to read an extract from a lecture ostensibly by a Nobel-prize winner in economics.  Some participants read a version that featured terms such as achievement, power, ambitious, social power, wealth, and authority.  Others read a version that emphasized honesty, loyalty, helping others, social justice, responsible management, and protecting the environment.  They found that students who read about self-transcendence values showed a less positive link between self-enhancement values and condoning of cheating.

This is utterly bogus, and designed to promote a progressive agenda. I could as easily design a study showing adherence to collectivist values is associated with antisocial behavior. Another illustration of political bias in social psychology.

Where your right is that it is “liberal” in it’s framing, in-so-far as it is couched in terms critical of the status quo capitalist framework.

The study of Pulfrey & Butera is backed by a recent experiment of economists Susanna Grundmann & Prof. Dr. Johann Graf Lambsdorff, a reknowned anti-corruption researcher, in the Journal of Economic Psychology, 63 (2017) 27–42. A short overview is given in YouTube:

The authors summarize:
“We show that tax morale decreases with
income. Simply put, the rich are greedier. We also show that raising taxes does not undermine tax
morale and might thus reduce inequality. Enjoy watching it, feel free to comment and please share!”

The design of the study is certainly not biased by progressive attitudes.

Alas marshmallow studies like these are rather skimpy evidence for identifying the roots of evil. It is a looong leap from self-report student studies (even with a brief experiment) to the Michael Cohens or Paul Manaforts – even Trumps of this world. The desire for self-enhancement seems a rather minimal causal factor in developing into a sinister human being.

If you can design *and competently execute* a study that that shows “adherence to collectivist values is associated with antisocial behavior”, I would like to see the results. Data are more convincing than unsubstantiated speculation.

Jack Feldman’s comment is totally bogus and illustrates braindead right wing trolling. If it’s so easy, just do it. I won’t be holding my breath waiting.

No political bias, here come the data.
1) Caroline Pulfrey and I, in the paper discussed here, have shown that individualistic values such as self-enhancement predict individual cheating.
2) We have also shown that self-transcendence values NEGATIVELY predict the acceptance of individual cheating:
https://link.springer.com/article/10.1007/s11031-015-9530-x
3) However, self-transcendence values also consist of benevolence values, values related to in-group loyalty. Well, it turns out that these values do predict cheating, but COLLECTIVE cheating:
http://psycnet.apa.org/fulltext/2018-11627-001.html
As I said, no political bias.