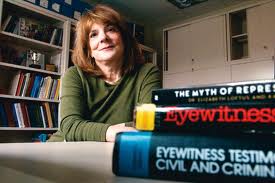 The New Jersey Supreme Court this week released radical new rules on the use and misuse of eyewitness testimony. The ruling has profound legal implications, essentially challenging the 34-year-old U.S. Supreme Court standard for the reliability of eyewitness memories of crimes, making it much easier for defendants to dispute eyewitness evidence in court. The New Jersey Court is considered a trailblazer in criminal law, and the ruling could well end up re-shaping the law of the land.

The ruling also reflects decades of scientific research on human memory, and its failings. Although this work has been done by scores of scientists in as many labs, the core idea—that human memory is untrustworthy—can can be traced back to Elizabeth Loftus, now at the University of California at Irvine. There are only a handful of psychological scientists whose work has so profoundly altered their field—and the public understanding of that field—that it’s difficult to imagine the world as it was before. Loftus is one of these, and this most recent ruling will broaden her influence on public policy and law.

To fully appreciate Loftus’s impact, simply recall that memory was once thought of as a filing cabinet, a more-or-less organized storage place for learning and experience, all the details of which were intact and accessible, waiting to be beckoned and retrieved. We now know how inadequate that metaphor is. Memory is not a filing cabinet, nor is it a videotape. Human memory is in fact fragmentary, malleable, and untrustworthy. But this new view was a long time emerging, and has been met with harsh criticism and stubborn resistance along the way, both in labs and courtrooms. In a recent “Inside the Psychologist’s Studio” interview—expertly conducted by psychological scientist and author Carol Tavris—Loftus touched on the highlights of her career-long effort to understand and describe the complexities of remembering and forgetting.

Much of the scientific change has played out against high-profile legal cases in which Loftus has served as an expert: the Hillside strangler case; the Menendez brothers’ murder trial; the Rodney King beating; the Bosnian war crime trials in The Hague; Oklahoma City bomber Timothy McVeigh; Oliver North; Michael Jackson; Martha Stewart; the Duke University lacrosse team; the list goes on. Each of these legal battles turned in some way on scientific issues involving human memory, and the cases both shaped and reflected Loftus’s insights into memory’s imperfect nature.

Consider the 1989 case of Eileen Franklin. Franklin was a 29-year-old California woman who, suddenly and for no apparent reason, uncovered a “repressed” memory of her father brutally murdering her 8-year-old friend two decades before. Based only on this recovered memory, the prosecutor charged George Franklin with the unsolved murder—basing its case on the theory that people repress traumatic memories, sometimes for years. The defense called Loftus for her views on repressed memory, and she ended up testifying that there was no credible scientific evidence to support this view. George Franklin was convicted, and spent several years in prison, but a higher court, convinced by Loftus’s testimony, finally exonerated him.

The Franklin case sparked fierce “memory wars” that lasted through the ‘90s, with several more celebrated cases, some including allegations of Satanic abuse and human sacrifice. The memory wars also pitted psychological scientists against clinical psychologists—with clinicians arguing for the validity of repressed memories and scientists claiming that the idea was invalid and unsupported by evidence. So heated was the debate that the American Psychological Association convened a committee to draw up a consensus document on the issue. The committee, which included three scientists and three clinicians, was so polarized that it ended up publishing two separate reports—and furthering the rift between science and clinical opinion.

The memory war has largely gone to science, with public opinion following. But scientific and public skepticism does not stop prosecutors from continuing to charge people with crimes, based on recovered memories, nor does it stop clinicians from testifying to the validity of the theory. A smattering of cases are still built on such testimony.

Loftus’s legal reasoning has always been based solidly on her laboratory science, which demonstrated how easy it is to distort someone’s memory—or to implant original, and completely false, memories. The knowledge and skill to “engineer” memories have the potential to do good, and they also raise important philosophical and ethical issues.
For example, Loftus has successfully implanted false memories of disliking certain foods—hard boiled eggs and dill pickles. This success points to the possibility of implanting in obese teenagers’ minds the idea that they dislike fattening foods—or warm and comforting memories of healthy foods like asparagus. Critics are already howling about the ethics of “lying to children,” but Loftus’s view is: “What’s worse—obesity or a little, teeny bit of false memory?”

Other scenarios present more difficult conundrums. For instance, Loftus works with U.S. military officers in survival training. As part of this “if captured” training, these soldiers are subjected to grueling, very unpleasant interrogation—after which they are asked a series of questions about their interrogator: Did this man give you a blanket? Did he offer you water? Loftus has shown that by simply showing a photograph of someone new—a stranger—while asking these questions, she can distort the soldiers’ true memory of who interrogated them. These scientific findings have some obvious ethical implications; they amount to a “recipe” for how to commit an atrocity and then make the victim incapable of identifying his interrogator.

Loftus is also exploring drugs that are in development for dampening traumatic memories. Are they a good thing? Is there a social responsibility to preserve traumatic memories, so victims can testify? Do people even want to lose their painful memories? Loftus and her students conducted one study on this last question, and the vast majority of people answered: No, I don’t want a drug that will take away my memory. These are important questions for society as memory research moves into the future, but for her part, Loftus sees the drugs’ appeal: “I would like to remember my mother’s death with a little less emotion,” she says. “It’s painful. I want to be happy.”

Wray Herbert is the author of the book On Second Thought. Excerpts from his two blogs—“We’re Only Human” and “Full Frontal Psychology”—appear regularly in The Huffington Post and Scientific American Mind.

Implanting false memories a good idea?! Wow! What is “Brainwashing” if not that? For every fat kid who is made to “remember” that he hates french fries, we’ll have thousands who “remember” that the Iraq war was an outstanding success, caused by Saddam Hussein’s vast stockpile of atomic weapons..etc. etc. Not to mention such things as how great the Holocaust was, or how benevolent Stalin was.. endless possibilities..

I have two questions: 1.How is this different from ‘hypnosis’? The example of teenagers combating obesity by being made to dislike fattening foods, is a strategy that has often been used in hypnosis. 2.In the same example, are memories of certain foods changed by implanting contrary memories of actual instances, OR, are the reactions to certain foods changed by implanting a general idea that those foods are distasteful?

I am working as a hyonotist and often people are calling me if i can help them to remember and i am always saying hat the memories are not real. 🙂